"Straight" is Not a Compliment 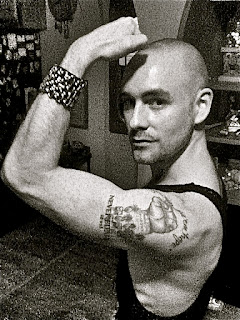 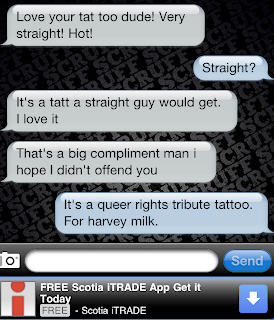 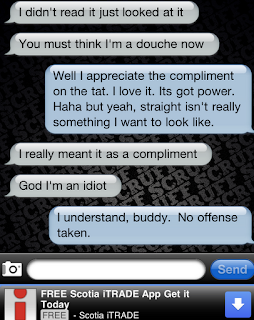 There's nothing like a guy "complimenting" you by telling you how "straight" you look, or seem, in order to reinforce my point (or make that "life-thesis") that far too many gay men are still walking around every day putting a premium on hetersexuality (or hetero-normativity) and concepts of Straight.

You know the type(s) - the folks who are still living each day looking over their shoulder wondering and worrying about what The Straights are saying about them.  It's still prevalent, and in many cases I can understand it in the younger members of our communities, who might not yet have found their confidence in a gay identity; they find a false solace instead, and they find it in their ability to "pass for straight" (which I and many others refer to as Passing For White).  Their sense of identity comes from a distancing of "gay" and an embracement of a Falseness - Pride in the ability to pass for what you are not.  Not all guys who are still stuck in this mindset are inherently or irredeemably self-loathing, but it's simply a sign that they're not too well-adjusted yet in their journeys as gay males.  No confident and secure gay male bases a value system, or a sense of actual self-worth, in terms of "how gay" or "how straight" he sees things.

For me, this was a remarkably restrained and benign response to something that I generally have absolutely little tolerance for.  I attempted to make what folks call a "teachable moment."

There was a time in my life when I might have been genuinely flattered by the "compliment" - I'm not very proud of my "early gay" years when I was, indeed, still hoping to find some form of societal acceptance by distancing myself from my gay brothers and sisters in the hopes that an attitude of "Oh yeah, I'm not like those other gay people" would somehow make my life better. I couldn't have been more wrong.  I vividly remember visiting my sister at her university and a male friend of hers "bonding with me" by letting me know that he was cool with me because I "wasn't a faggot."  He didn't mind gay people, and he was cool with me because "I wasn't obviously gay", and that it was "those faggots" that he hated.  I didn't yet have the confidence in myself to tell him what a load of b.s. that was, and it still sticks out in my memory as not only a low moment for me, but a reiteration of a point I've been trying to make for years - just because a prejudiced person "explains themselves" doesn't mean that their explanation makes any sense whatsoever, nor does it mean that their "reasoning" should be given credence and respect.
It was, however, a moment of great change for me as his comment made me angry.  I began reading gay and queer literature again.

I saw, and continue to see, the vanguards and heroes in our community.  The people who put themselves on the line, who embrace an elective visibility, in order to wake up others, change hearts and minds, and actually made actual societal progress in the advancement of LGBT people in our culture.  Reading the works of Ethan Mordden gave me a tremendous sense of not just gay history, but brotherhood - why on earth would I ever want to distance myself from these brothers of mine?  These people who share so many of my scars, and so many of my joys; we are connected.

For many men there is still a desire to "pass for straight." It's not healthy.  It shows a great fear, on their part, that being gay makes them "lesser" as men.  Disdain for "visibly gay" people is often another symptom.  This has nothing to do with concepts of masculinity, however.  Such an argument may come up, but that too will be only in the mind of the man who still wants to appear "straight."  We hear it all the time - the guys who have never been able to reconcile being gay and being a 'real man', and who continue to believe that to be a 'real man' one must be able to embody decidedly stereotypical straight-male characteristics, aesthetics, or manners.  One can very well be 'masculine' in the eyes of greater society and still be visibly, obviously, and identifiably gay.  It doesn't make him any better nor any worse than any male that falls on a different side of the "Perceived-Masc/Femme Spectrum".  Diversity, folks.

Now, the guy who sent me this message is in no way an awful person.  Just someone who would benefit from a change of mindset.
Rethink your value systems.  Interrogate your attractions, your securities, your insecurities, your sense of self and identity.  You cannot hope to find happiness in others or yourself if you are still comparing yourself next to a straight male as your way to validate your being.


On a side note, a good friend in California shared a photo with me of a friend of his - who has his own Harvey Milk tattoo.  Brothers.  See what I mean? ;-) 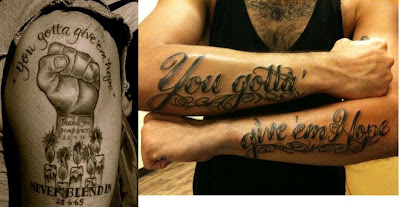 Oh, and the photo of you showing off the tatt - all kinds of hot. ;)

Being called 'straight' is pretty insulting, yes, but more importantly:

How is that you are you having actual conversations on Scruff? No one ever talks on that thing. Or maybe it's just me...

Ha! I remember you from the Connexion queer & questioning forum! Nice that you are still sticking up for gayness!

Have you heard of Why are Faggots Afraid of Faggots?

You should check it out. It's a great book. Sounds like it'd be right up your alley. :)

Dear Little Kiwi, thank you for pointing all the wrong things in the LGBT society. I have to admit that I'm not free of self-hating either, but thank you for being such an inspiration!

In the 80s, nearer to the outset of gay pride and gay visibility, a friend pointed out to me that the greatest threat to gay life, liberty, and happiness is a homophobic homosexual. Not to say everyone needs to come out of the closet, but every one of us should be comfortable in out own skin.

Oh, and that CAPTCHA ... dayum! Call somebody in to fix it.

OMG I came here via your YouTube channel to say how hot you are and I love your posts. I care about the same issues and share the same views. Hope I can ever get to NYC and maybe run into you (in a friendly way, not a stalker way). Luv from Chicago!

It's sort of funny in a bad way that both straight and gay men are scared to be labeled fem apart from some very strong guys who say fuck you and are what they want to be.

I think youngsters are actually more adventurous nowadays and are doing their own thing. No shame in saying you are bi and be open to opportunities.

Been reading all afternoon about 'not just a preference' and admiring your time and energy to make our gay world a little bit better.

Because it's all about conformity under the guise of protecting us from ourselves...

No thanks, when someone complements me for "acting straight", I just laugh it off.

Because it's a distinction, it's a compliment intended to distinguish me from a phony affectation that I've no interest in emulating.

I don't need to act like I'm the mega-fag, or anybody else, I'm who I am, and I'm fine with that.

I don't need to conform to some bullshit ideal of what it is to BE gay. It's a contrivance, it's a put-on. You do it to be more socially acceptable to other people who are also pretending.

Why can't these "Anonymouses" ever put a face to their comments? ;-)

This reminds me of guys saying "I am pretty for a black girl or I'm not usually into blacks girls but you are different". Guy this is not a fucking compliment but a bloody insult. Seriously, even if you think that please do not say it. It's offensive and insulting.

What I'm wondering is how you draw the distinction between gay men who found their identities on being able to "pass for straight" as opposed to gay men for whom being able to pass for straight is simply a reality of their lives? If you intend on criticizing certain gay men to some extent for building an identity on unstable footing, then that distinction seems rather important.

It's rather simple, Ezra - when they make it rather clear, as this guy did, that they value their perceived ability to "not seem gay" than their identity is just as I've written about. Gay men who "just happen to pass" don't consider perceived "straightness" to be a gold-standard - that's entirely the domain of the homosexual who feels his gayness makes him lesser as a man.

Any gay man "who just happens to pass for straight in the eyes of many unenlightened straight people" would never couch his experiences with the specific meaningless phrases and buzz-terms that this fella did.

It's not who or what you are, but how you are about it. I know far too many gay men who could, or can, "pass" in the Straight Worlds, and yet they would never ever ever consider that to be a "bonus" or "better way" of being a gay man. Why? Because they also possess the gift of awareness - awareness of self, of privilege, and of what certain demographics have an uphill battle in this world while others don't.