What Is Monogamy All About? 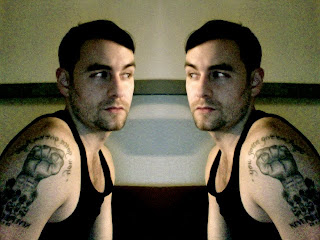 Ever have that moment where you start to rethink every 'value' you ever thought you held and started to think that maybe you might not be the person you thought you were?
The concept of monogamy: Something I'm fine with. The concept of a more open sexual life: Something I realized that I'm fine with, too.
Now, I'm not talking about polygamy, per se, but my issues with polygamy are not in how "it affects me" (because it doesn't), but rather the concept of 'freedom' when entering into a polygamous relationship. If polygamy wasn't practiced under the guise of religious expression where (and let's be honest here) women have no real voice or power, and MUST marry lest they anger their deity or their man, well, I'd say it was fine. Polygamy, as it stands now, is mostly practiced by males who 'own' women. If that wasn't true, there'd be more women taking multiple husbands. Fat chance, eh? Ugh, patriarchal societies are so predicable....
I tried breaking the questions in my mind:
complete emotional, sexual (and romantic) trust is not exclusive to monogamy.
it's possible to have a very deep, meaningful and fulfilling relationship with a sexual partner that is not your chosen romantic life partner, and have it be in no way detrimental to your chosen romantic life partner.

(holy, trying to find other ways to say "boyfriend/husband", eh?)

Now, it's not for everyone. and it will not work for every couple. just like monogamy doesn't work for everyone.
gay males have a shared orientation, but that's just our orientation, it's not our sexuality. we each have our own individual sexuality, with our own individual sexual appetites, urges, desires, and capacity for emotional-sexual relations.
and it really goes for all humans. Read the Kinsey research, folks.
and it's not just about *FUCKING*, either.
remember, folk. open-relationship doesn't even necessarily mean "married but with one night stands".
i know i'm not the only human being who enjoys getting to really know and befriend and develop connections with my sexual partners...
it's not just about "being free to fuck a random hot guy".

i've been Out for a while now. i have seen all kinds of relationships thrive, and all kinds of relationship fall apart.
the only universal constant is that we're all diverse.
i thank GOD for the sexual partners I've had over the years, from what i've shared and learned from them, and i'm not just talking sexually, boys.
we're all different. nobody's experience or 'love' is any less rich than anyone else's because one couple is monogamous and one couple is open.
while one couple may say "We're so in love that we don't want to be with anyone else" another couple may say "We're so in love that we can share sexuality with others, and each other, with such trust and understanding that there's no fear or feelings of jealousy"

viva la shortbus generation!
i know how i feel about monogamy. i know how i feel about non-monogamous relationships.
i don't know where i sit in terms of it now, personally, for me. And of course, i cannot say where those thoughts will lead in the near and distant futures.
But I'm thinking. And thinking is always a good thing.
One day, maybe i'll wanna get ----gamously gay married. i can't say poly or mono yet. we haven't decided as a couple.
Posted by Little Kiwi at 18:31

Well and fairly stated. I know what Allen Ginsburg said, "the prospects of monogamy terrify me".

This is difficult think to think about, because it requires us to unlearn everything the heteronormative culture has taught us about love. This is some tough shit to work out. Best of luck to you, sir. :)

Thanks for bringing this issue to light. I've tried having multiple partners. It isn't for me. I am a jealous bitch. But what irks me is this: people who look down upon the very idea of it, and who slut shame(something I have a HUGE PROBLEM with) those who are in open relationships. Honey, if its what you makes you happy, and your partner(s) happy, go for it. And thank you SO MUCH for trying to educate those who have such disdain for those whose ideas of love and relationships and commitment differ from theirs. Well said, and a much needed blog entry.

funny that I post right under my original comment on this condemning my own ability to have open relationships. I was still in the "I'm single on purpose because my shit is fucked up" stage when I wrote that. Since then, I have lost 42 lbs, gained A LOT of confidence, and realized I can love all kinds of women for all kinds of reasons and if both primary partners are open to it there is absolutely no reason not to do it. Fear. Rejection. Feeling unattractive and losing my woman. No longer being the most important. On and on with the bogus reasons I clung to monogamy. I am enlightened now, my friend, but I think you already know that. ;)