No, Racism is Not Dead

There's something very interesting about this time in history.  We're in the digital age - all is recorded.  There are no doubt a lot of families in North America, amongst other places, that are very very lucky that their own family's sordid histories of bigotry and prejudice are not documented and accessible via digital technology.  Families of anti-Integrationists that can sleep at night because their family's history of bigotry was at its zenith in a time when documentation simply wasn't possible.

And then we have folks who don't seem to realize that things like Twitter are, well, worldwide.  And permanent.  You can delete the tweet, but you can't stop others from saving and re-tweeting and exposing you for the bigot you are.  Politicians who make bigoted speeches before congress and before their flocks of followers at conventions.  Average everyday citizens who go out to march for some cause they think they care about...holding signs of hatred and ignorance.  The bigots of decades past are , for the most part, safe and hidden away - no cameras documenting their every move and word.  But the times, they've a'changed. 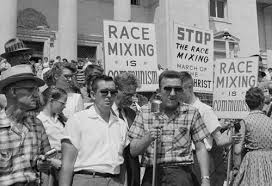 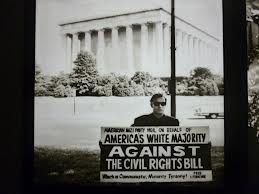 We've all heard a lot of "racism is over because the President of the United States of America is black" nonsense.  Anyone who maintains even a mild level of social consciousness can tell you that after Obama's election in 2008, the crazies came out of the woodwork.  And again in 2012 - tweet after tweet, post after post, comment after comment - pure, unbridled, inexcusable racism.

And then, this happening this week.....
link here:
http://publicshaming.tumblr.com/post/48020892347/jamie-foxx-attended-the-mtv-movie-awards-on-sunday 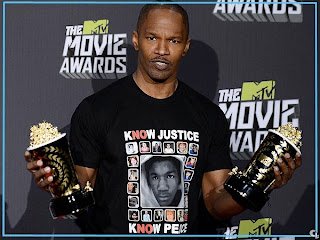 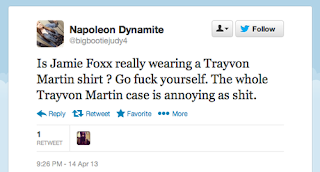 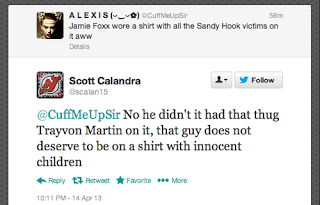 What century is it, again?  Who are these people?  What failures of culture and humanity raised them?  Oh, well - like I said - it's the digital age.  Congrats, folks - you expose yourselves to be the scum of society.
There are folks who seem adamant about ruining their family name for future generations.  I've often been stunned at the way people like Jesse Helms are still canonized by some people - then I see tweets like these and I have to remember that bigotry is alive and well.  And the saddest thing?  It's learned.  It's not innate.  You need to be carefully instructed on how to hate.

At this point it doesn't even matter what brand of hatred you subscribe to.  You put it out there, it's for all to see.  Years from now, the grandchildren of Rick Santorum will have to live down their family name.  Look at history and see how the world works.  See how you will be remembered, and realize the harm you will inflict on "your own" by continuing to cling, for no intelligent reason, to baseless, archaic and deeply ugly bigotry.

And don't even get me started on that "Accidental Racist" country/rap song, which has to be the stupidest thing I've yet heard.

So think about it, grown adults - what legacy do you want to pass on to your children and grandchildren?  It you cling to your bigotry, remember that it's a stain that will mark your family line for a very very very VERRRYYYYYYY long time.

As a dad whose four children all have different racial backgrounds, I agree wholeheartedly and thank you for making your statement on it.

This is such a great perspective. If people chose to be racist, that's their (unfortunate) choice. Though, being everything is so put out there and documented, if One doesn't consider what they post, it's impossible to hide and it's important to teach that though One is entitled to their own opinion, they should really consider how their words will effect their family name in the future - because there is simply no denying One's perspective if they blast it on the internet for whoever else to read.

Thank you for sharing.