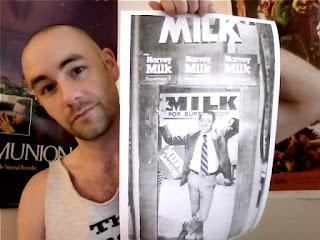 Well, today is Harvey Milk's birthday.  And as I sit here having my coffee and looking over at my bookshelf where I see my collection of Milk-related reading and viewing materials, I can't help but think about some conversations I've had with some younger people over the last few years, who were just making their first toe-dips into a post-Closeted life.

Mainly, a question a few of them asked me which was "Are you proud to be gay?"

Some follow it with "Why? You didn't do anything to earn it.  It's like being proud to be straight."

Except it's completely, totally, utterly not.

What is Pride?  Well, I'm proud to be Out, for one.  Proud to be openly-gay in a world culture that is still predominantly anti-gay.   Proud to be a member of a large community that continues to push against bigotry and prejudice and glass ceilings.  Proud to stand alongside my brothers and sisters of the LGBT communities, who continue to humble me and inspire me with their grace, resilience, strength and courage.  Proud that despite having spent the first half of my life not wanting to be gay, and  convincing myself that I could never let myself be gay - I am now as Out as they get, and pretty darn happy about it.  Proud that I have inspired others, as others have inspired me, to become a visible and active face for positive change.

I think of the National Equality March in 2009, when (to my greatest of joys) a number of my straight friends got on buses and joined us in Washington DC to march and protest and celebrate LGBT Equality and diversity.  It was one of those astounding moments that I, as a young kid, would never have thought would happen.   Me, with my straight friends, who out of the goodness of their hearts and reflecting their strength of character, took it upon themselves to travel to another city and State (District?) to show their support as Allies to my community.

I'm proud to know them.

Which brings it back to Harvey - I first saw The Times of Harvey Milk when I was a teen, working in a videostore.  Having that job meant I was able to take home movies to watch, without anyone knowing I'd rented them; movies I was, at the time, worried about being seen with.  Because, you know, it might clue people into the fact that I was indeed gay.  It was a fear that affected my literature tastes, too.  I wasn't confident enough to take a "gay" book out of the library or bookshop - instead, I'd read Jane Austen, Toni Morrison, Alex Haley, Amy Tam, - I was desperate for stories of triumph over social prejudice and injustice.  I'd read about Malcolm X, the Suffragette movement -  I was desperate for inspiration, I was in need of Hope.  Seeing the documentary on Harvey Milk got the gears in my head turning.  For the first time I thought "You know what...I could do this, at some point. I could actually do this."

It's one of those funny things - the folks who dismiss queer literature, queer cinema, or any form of reading on queer/Gay icons and/or historical figures are almost always the ones who need to get those messages the most.  Because if you want a reason to be proud to be a member of the LGBT Communities, all you need do is learn our collective history, read the stories of our brothers and sisters who came before us.  Inspiration guaranteed. 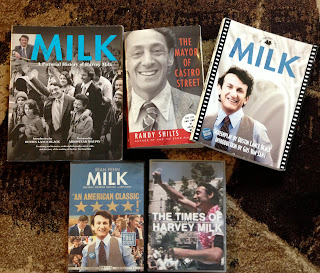 So here I am, all these years later, enjoying a life and embracing myself in a way my childhood self would never have thought possible.  There are many to thank for my being able to love my life today.  Many nameless, faceless LGBT people who never became internationally, or even locally, known icons and advocates, but who nevertheless helped change the world and open the doors for gay people like me  -  simply by being OUT.

More than occasionally, due to the nature of my blogging and my online presence and my demeanor which is apparently a cross between a docile pitbull and a rabid Jack Russell Terrier, I've been called an attention-whore, and variations on that theme (that theme being - "Likes attention and is also a slut", or something).
But here's my take on it - I do it because I can.  I come from a place of privilege that makes me feel that I truly have a responsibility and/or obligation to be Visible.  I can do it, so I should do it.  So I do. 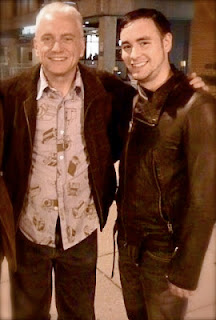 Those years ago in DC I had the incredible opportunity to, completely by chance, meet a good friend of Harvey Milk's from back in the battleground days in San Francisco - a chance meeting on the street, a conversation, a dinner followed by more conversation.  Dan Nicoletta - I recognized him immediately.  I stopped him on the street, thanked him for his years of work for us all, and showed him the tattoo I'd had in tribute to Harvey and his "gang" of game-changers.  Dan invited my friends and I to join him for a meal (we paid for him, of course. how could we not?!?!).  He regaled us with stories about his times with Harvey, and the times after.  My heart broke and sang and broke and sang - opera, yo.
He said to me, "Harvey would have loved you."

I can only hope.