Stop Being Part of the Problem, Not the Solution

Grady Smith posted a video where he "comes out", his own words, as a Gay Christian - who chooses celibacy because he thinks it's a sin for gay men to "act on" their feelings.


His supporters have chimed in, and it's clear that they feel what I'm pretty sure Grady feels (he's yet to address my questions clearly,  so I'll update when he does so) - that non-Christians go to "Hell" when they die.  Because if you don't have "faith in Jesus", you go to Hell.

So, Anne Frank is in Hell. With Gandhi.  And the more than 6 million Jews exterminated in the Holocaust. And everyone else who doesn't follow their one narrow interpretation of one of the world's many religions and denominations within said religions.

Here's Grady's video. Below is my rebuttal video, and forgive me for not being more articulate - I popped the thing off in a few minutes.

Hey, I'm a gay Christian. How come my church doesn't demand celibacy from me? Oh, right. Because the denomination and congregation I was raised in isn't a dogmatic cult. We don't even believe in Hell. Or exclusivity. Or that there's "one true faith."

Grady has disabled the comments on his video, which is sort of like when NOM or Fox News disables the comments on their videos: when too many folks come in to rationally and intellectually shred your arguments like tissue paper, it's the coward's choice to pretend those comments were never made.  Maybe Grady can get a job at Fox News...

However, some of Grady's supporters chimed in on my page.  Here are some from "Jake Reusink" - I've been around long enough to know that the evasive double-speak can only last so long, and eventually Jake Reusink just cops to the truth - he believes that "All Non-Christians Go To Hell", which of course is also the long-abandoned proposed sequel to Don Bluth's animated "All Dogs Go To Heaven."

Flippancy aside, these beliefs are harmful.  Very harmful.  Religious Beliefs are currently the number-one enemy of LGBT Equality - which is not to say that all religions are anti-gay.  But Grady's is.  As is Jake Reusink's.  "You can be gay, you just can't act on it."

So, I posted by rebuttal and Grady terminated the comments section on his video.  I highly doubt he
will get his parents on camera as I asked him to. I highly doubt he will be clearly direct about the specifics of his beliefs.
But his supporter here, Mr. Jake Reusink, spelled them out.  And doesn't even seem to realize how ugly they are.  Here they are, for your enjoyment. 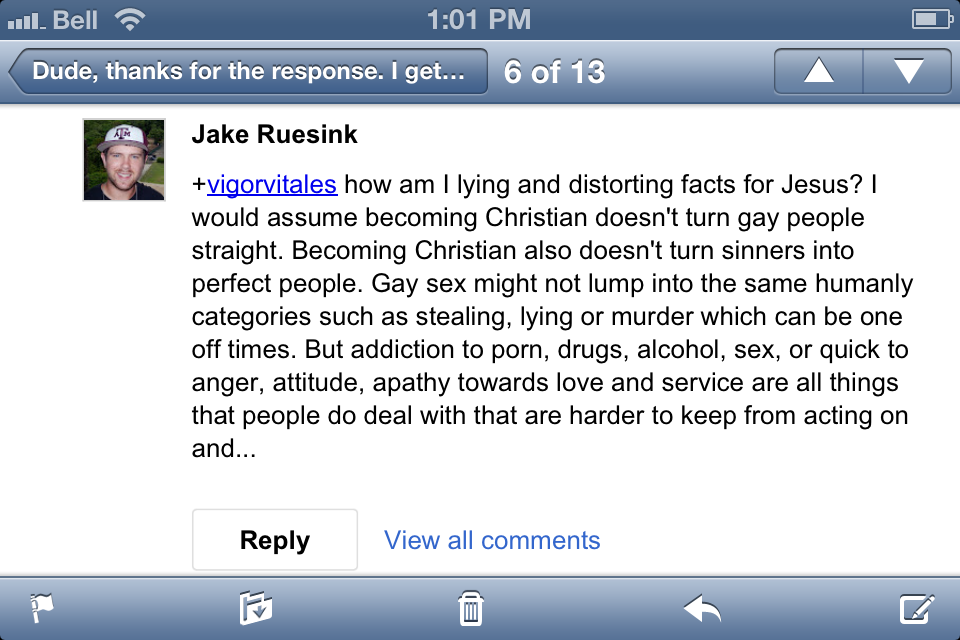 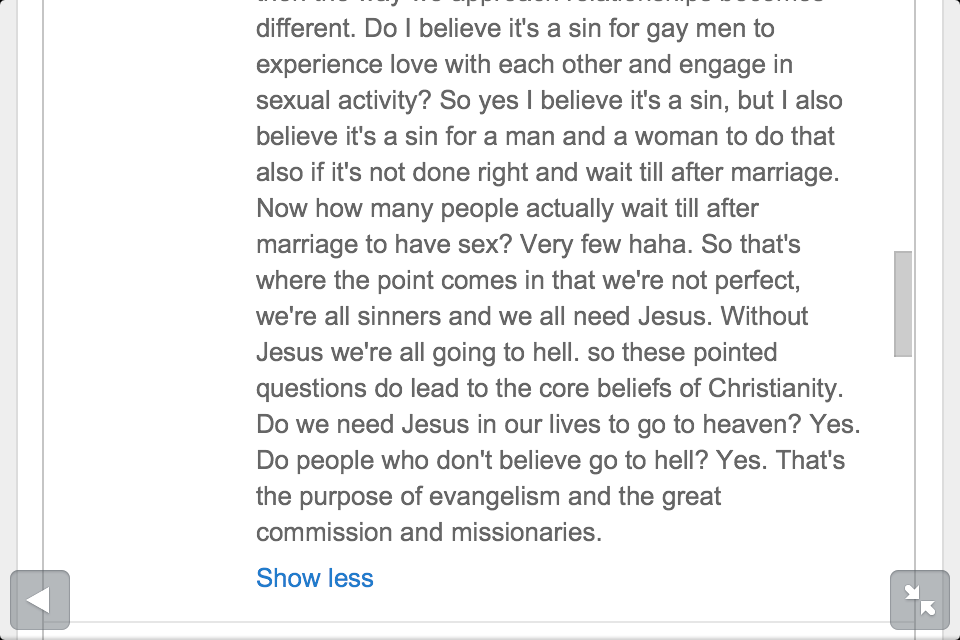 A funny thing happens when guys like Grady Smith and Jake Reusink reveal their core belief about "Hell" - they instantly prove that they don't have Faith - just Fear. They don't love God. They don't love Christ.  They believe that if one doesn't then that person goes to "Hell".

Thus these two boys do not Love God nor have "faith in Christ" - what they are doing is merely lip-service; done to ensure that they don't go to Hell, which their chosen religious cults have driven into their minds.
Who is more generous, the person who Gives because they feel that Giving is the right thing to do, or the person who Gives because they think "God wants them to?"

If you love God you cannot believe in Hell. The second you expose your belief in Hell you prove to everyone that your faith hinges entirely around "doing whatever you feel you need to to not go to Hell."

Now, for some added satirical irony to wash away the taste of religious bigotry. *btw, Satan isn't real. Ask any Satanist* 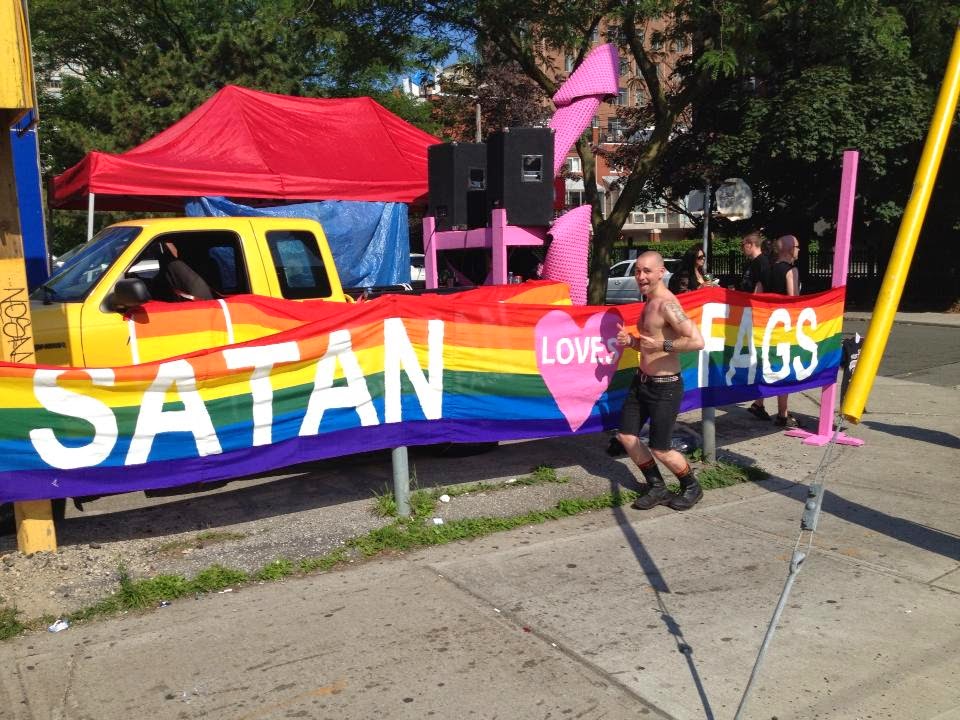 Sidenote, and not a happy one.  While Grady's video pretty much was only seen by gay audiences, that alone is damaging enough.  A young man whom I'd met before through outreach programs, and who's been struggling for years to un-learn all the "if you act on it you'll go to Hell" messages his family and church drummed into his head, tried to kill himself just two weeks ago after seeing Grady's video.  He'd made much progress, but Grady's reiterating of the ignorant nonsense that "gay sex (even in a relationship) is a sin" was enough to set him back.  My young friend is alive, he's in the hospital, but we nearly lost him.  He jumped off of a bridge, after figuring his life was going to be empty or destined to lead him to "Hell." His sister had forwarded him Grady's video, with a message saying "SEE? This is what you should be doing."

So, thanks Grady,  for helping drive a struggling young man to suicide.

EDIT
Grady has now removed his two "gays need to be celibate because God says acting on it is a sin" videos from youtube.  Clearly, sharing his ignorance with the world resulted in a resounding level of "what the fuck are you talking about?" instead of the "yay! you're right! acting on being gay is a sin!" he likely expected due to his only ever interacting with similarly bigoted "Christians."  Doesn't really undo the harm he's done, but at least his lies cannot be spread to others.

Love you Kiwi, you make my day. I find it sad that like you said these people don't do things because they "love" doing them they do it so they won't go to hell. I hope you had a wonderful gay pride. Seattle's was fun Tacoma's s in a couple weeks. Enjoy!!
Dean

Christians like Grady don't seem to "get" that asking people to live in a contradictory world like this is incredibly harmful to the church. Then they are surprised when young people roll their eyes and walk away.

Having worked for the past ten years or so to spread the word that my denomination is evolving rapidly on issues of inclusion, it makes me very frustrated that some of our LGBT brethren of faith choose to stay in places where they are relegated to second-class citizen ship.

Are the lifeboats seated according to sexual orientation? Because the space in society for churches like this is shrinking faster than the polar ice cap.

So basically the guy thinks that his own issues, and inability to function should become the way of the world.

Cambel - what we see with guys like Grady and Matt Moore ( Facebook.com/moorematt89 ) is akin to needing others to join in their Group Lie - creating a Group Delusion. It's not that different from how ex-gays need more other lying "ex-gays" so that they can convince themselves, through numbers, that they're Not Full Of Shit. Which, of course, they are.

This is why Grady has removed comments from his videos, and blocks people, and dismisses them as "haters" - at this point, he needs to reassure himself that all the lies he tells himself are true.

The church can't demand celibacy. The bible clearly states that celibacy is a gift and not everyone can do it. Those poor priest must be starving for cock :(

I hope your young friend is alive and doing well. The damage that these haters cause in the LGBT community is unknowable. Spreading lies and depression instead of sending messages of hope and peace and acceptance astounds me. And when you tell the xtians that the bible says to love your neighbor as yourself, you get told that telling you the 'truth' is love....sigh....


One day I hope his sister realizes that she pushed him off that bridge, and in doing so nearly killed her brother.