"And How Is That Working For You?" or "Maybe Everyone Else is Sane and *You're* the Crazy One" 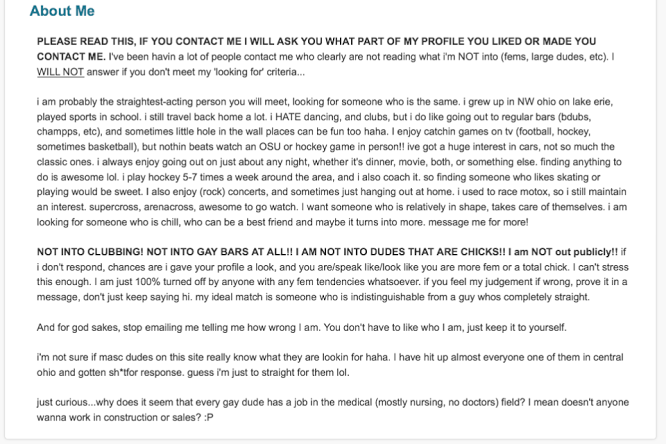 A buddy of mine forwarded this dating profile from Plenty of Fish to me - this guy had hit him up, and needless to say he does *not* want to go on a date with him.

This is not merely another of my tirades about internalized homophobia and the shameful and cowardly way that some Closeted men choose to denigrate, and demean the types of gay men that homophobic straight people taught them to have an aversion to.  This is more about being real, and doing the Dr. Phil thing.   The Dr. Phil thing, for those who don't know, is to ask yourself "How is this working for me?"

It's what Dr. Phil says to a person who adamantly defends their positions or outlooks despite the wealth of available evidence that, yes, "their way" isn't getting them the results they want in life.

This is not about loving sports, or interests or hobbies that greater society deems to be "masculine", this is about being real with yourself even if you're not yet ready to be real with anybody else.  Self-delusions aren't healthy.  Telling yourself everyone else must be insane is a great way to ensure that your life remains mediocre: heaven forbid one take into consideration the *possibility* that maybe, perhaps, the reason everyone keeps having the same response to you is because....well.... you deserve those responses.   Maybe you're earning them.  As someone close to me memorably said to an extended-family member, "I'll stop saying you're a racist when you stop saying President Obama is a Kenyan-born Muslim Socialist who wants America to be destroyed because he's part of the Muslim Brotherhood."  Maybe everyone thinks you're a self-hating asshole because you're speaking a language exclusive to self-hating assholes.

The second-last paragraph in this man's dating profile is the clincher.  It's the gold.  It's the thing the guy whose profile this is needs to sit and think about until he finally wakes up.  Seriously - look at the second-last paragraph he wrote. All the guys he thinks are masculine, that *he* has messaged - have shot him down.  And he chooses to ignore the reason why.

No.  You're not too straight.  You're not too masculine.  You're too proud of your self-loathing, buddy. You've swallowed culturally-learned hate, digested it, shat it out, and then ate that shit.  You are not too manly for anyone - if anything, at present, you're not yet *man ENOUGH* for any self-respecting gay man to want anything to do with.  It's actually really sad.  This is the insidious nature of homophobia and anti-gay bigotry in culture.  Gay men don't just naturally have an aversion to other gay men or perceived "gayness" - it's learned.  It can be unlearned with those who have the inner strength to do so, and self-interrogate, and question the world around them and their part in it.  You can't be a gay man who doesnt' want to be gay, and doesn't want people to know you're gay, and complain about how you've been unable to have a relationship with another gay man.  I feel very sad for this guy who wrote this profile.  He's clearly not loving life.  I have sympathy for his circumstances - but very little for how he's choosing to deal with them.

But many do not ever allow themselves the chance to do that.  Their pride in their insecurity becomes a false and poisonous safety-blanket.  The longer a person tells themselves these lies, the harder it is to stop telling them, and break free of a need to fall back on them.

I know some guys want to be "in a relationship" before they Come Out.  Careful with that one, brothers.  The longer you wait to come out, the older you get, and the older you get the more your pool of "guys your age" who are in the same place as you becomes limited.  You end up being 30+ years old, and at a place in your "gay life" where many other gay men were in the early-mid twenties, or late teens.  These days more and more LGBT people are self-identifying as such in their *mid*-teens.  There are certain rites of passage that openly gay men go though, and acknowledge.  Certain things we, both personally and socially, process and experience and collect as part of our journey and story to becoming the man we are.

The Closet is an iron maiden - you think you're safe in it, but you're really dying a little bit more each day.  It makes people crazy.  So crazy that many decide to blame everyone else for their own problems.

And so, I present this profile as a visual reminder of the Journey.  A sadly-clear example of how toxic it becomes to absorb cultural prejudices and homophobia, and how refusing to see it as internalized homophobia only means you're poisoning yourself, and slowly dying every day, while you instead tell yourself that everyone else is crazy.  No, they're not.  They just don't hate themselves for being gay.  Calling a guy a fem or a chick or comparing him to girl doesn't make you masculine.  It makes you both a misogynist and a self-hating homosexual.  Boasting of how straight you think you appear doesn't make you more of a man.  Men stand up to be counted.  Boys give excuses not to. Men don't take pride in passing for something they're not, men are proud of who and what they are.

I understand that not all men were raised to view being a man that way.  But at some point, like I said and like Dr. Phil says.....well, "how's that working for you so far?"

Haha, his ideal match is "someone indistinguishable from a straight guy"? What's that mean, someone who's exclusively attracted to women, so they wouldn't be into him anyway. Straight men don't try to hook up with other men, therefore he doesn't "act straight".