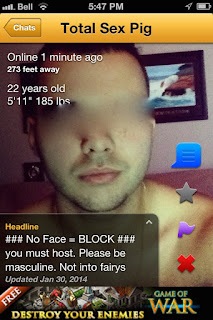 I saw I had a message from this guy here.  And this is what he had to say. 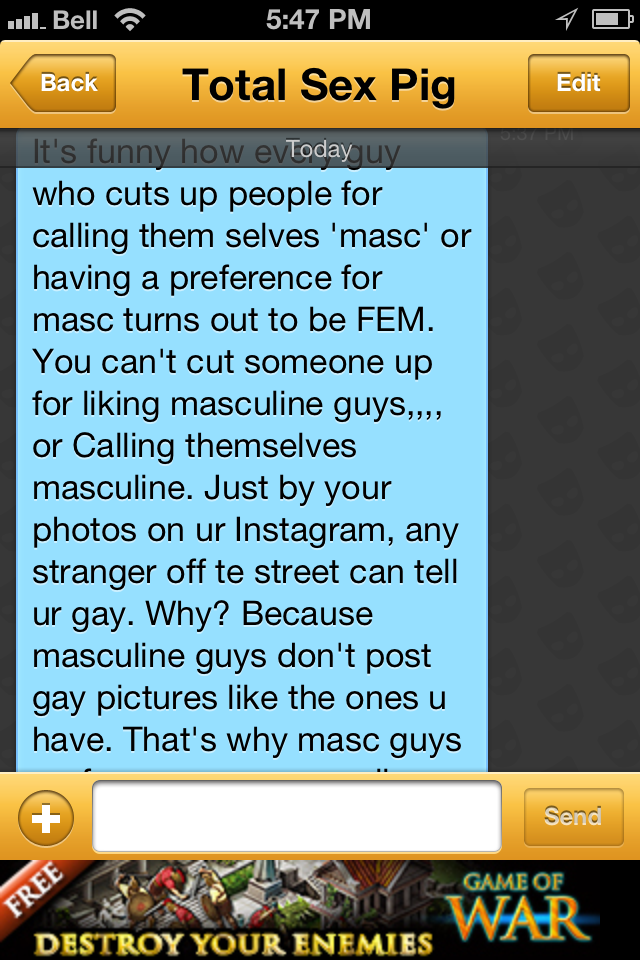 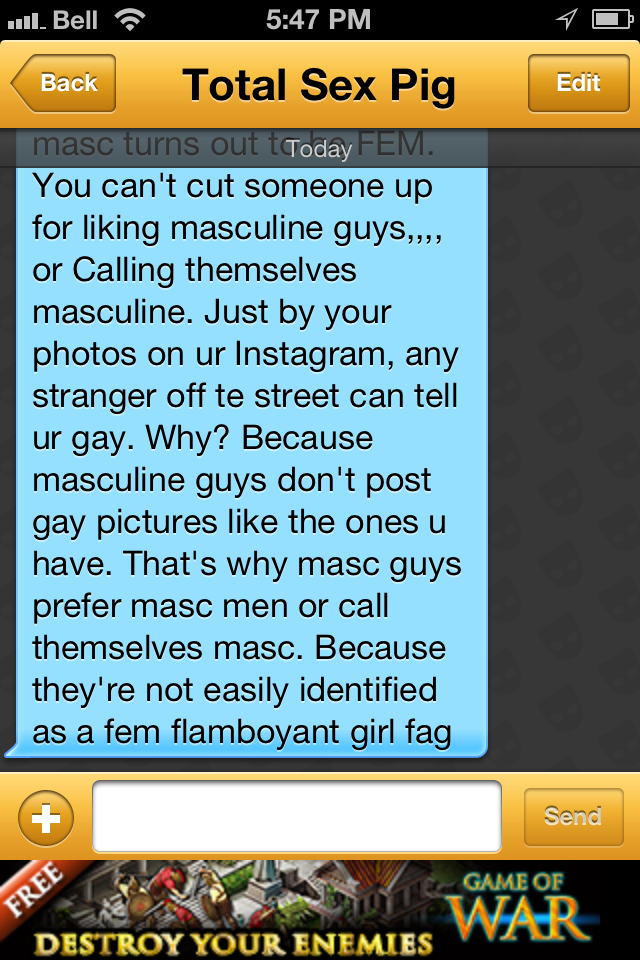 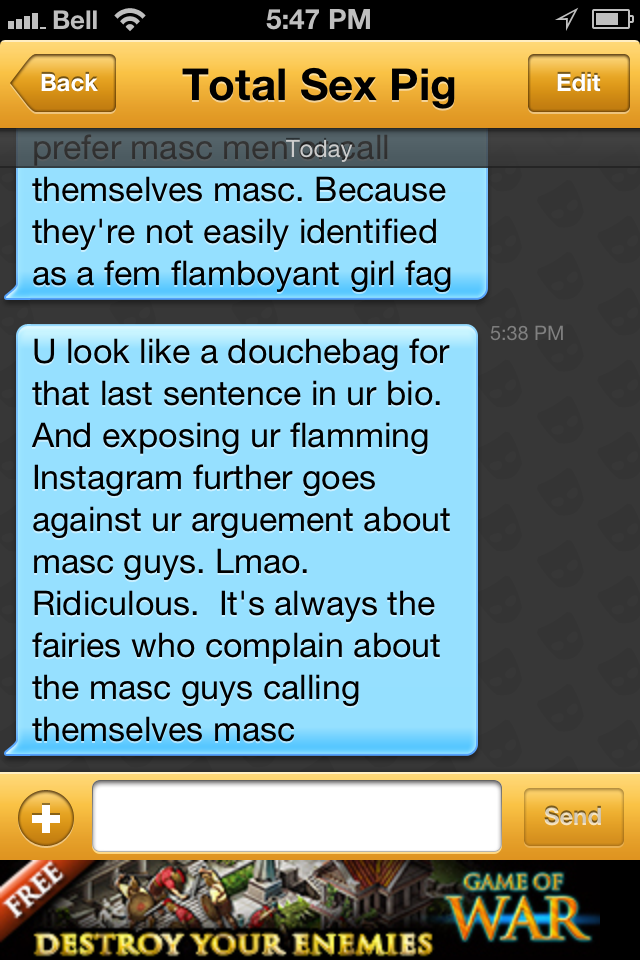 I hope people can tell that I'm gay, actually.  I want them to be able to. I love being gay. I love being visibly gay.  It's a great way to not only meet other gay guys, which is always fun, but to let everyday people know that, yes, they do indeed interact with gay people on a regular basis.  I've been Out for nearly 15 years now.  I don't worry about people knowing that I'm gay.  And I haven't for many many many years.

Oh well.  I guess I'm a fairy.  Such a fairy that my overt fairy fem-ness means that even a "Total Sex Pig" (who can't have guys over to his own place) went out of his way to message me,  to let me know that I'm a fem fairy. I guess we won't be marrying, eh? Oh, darn.

"It's always the fairies who complain about the masc guys calling themselves masc."  Well, except in this case, it's a "fairy-hating" guy getting upset that a guy (he probably wanted to fuck) is calling out the meaningless "masc" nonsense that he seems wrapped up in.

But curious, if you're "not easily identified as a fem flamboyant girl fag" then why would you need to say that you're "masc"?  Wouldn't it be obvious?  I mean, if you have to *tell* me...... Oh, who am I kidding. I can't expect much logic or reason from this guy.  That one little line in my profile inspired a rather intense and nonsensical rant from him.  Sometimes it's worth noting that a guy with "Crazy Eyes" may be,  in fact, legitimately crazy.

That dude is a complete mess. I wonder why he can't host? Either he's not out to his roommates or he probably lives with his parents. What a fucking idiot.

In the South we've a saying for people like him, "Bless his heart, just ate up with stupid."

Wow, you really hit a nerve with him. He's probably too stupid to realize what a complete ass he made of himself.

Its so sad that you think you can blog about people who do not like feminine guys and make them look like the bad guys. So what if he isnt into girly guys? Thats his preference. He was simply stating that your profile bio must have made some rude remark about masc guys. In fact, it is you that looks like the idiot in this case. If your tired about masc guys confronting you about it, then simply dont state that you dislike guys who call themselves masc.
Maybe 'little kiwi' your just not blessed with complete mentality

To the "Anonymous" above me: I'm guessing you think there's nothing wrong with his "no fairys" statement. Because only a complete fucking idiot would complain about the line in my profile and give a pass to not just the "no fairys" in his, but the truly pathetic and self-hating homophobic tirade he launched into, simply because of that line in my profile.

Oh my God I know him from school at Humber! And yeah he's an asshole. I think that the anonymous guy commenting is probably him, he's really not that smart and that's how he talks.

Yeah, but at least that guy doesn't have a body in a suitcase in the closet like that Dorian Corey dude in "Paris Is Burning." (For fifteen years! Throughout that whole movie!) Now THAT'S sick. Werk!!

perhaps his home address should be posted?

Masc is used to identify roles, not characteristics.

Guys who say they're masc want to treat you like a bitch.

Guys looking for masc want to be treated like a bitch.

I was reading that intelligent Grindr profile you posted, thinking, "Man, this guy sounds like the guy of my dreams!" and then the caption informed me that it was you! I've written a personal essay about sexual racism in the gay community, so reading your posts breaking down masculinity and homophobia and all that made me feel a little more sane. So thanks for that.

My question is how do you stand being on Grindr with so much asshole-ism everywhere?

Well, I'm always intrigued by Grindr-interactions; they're pretty much the only opportunity i have for interactions with people outside of my specific sociological circle of friends - were it not for Grindr, I'd never share words with a racist self-hating homophobe, as those guys have no presence in my actual life. it's a window in the worst parts of the human psyche.

Funny thing about personal taste. I find the guy casting aspersions on you to be anything but "masc" looking.

and Kiwi..... first time visitor but all I have to say is WOOF!

I used to have in one of my profiles "Not interested in str8 acting, here's your oscar go eat some pussy" and the response from that one line was more than all the responses from all my profiles EVER! Ridiculous.