Are Pride Parades too "sexual"? Is there "too much nudity"? Is this Much Ado About Nothing?


every year the same few people seem to get very very upset about "sexual content" (a loose term, no pun intended) in the pride parades. thought i'd ask my parents their thoughts. these are some of them.


for more on what was being discussed in Toronto, you can check this link here:

Whether or not one feels that there is "too much nudity" ("Too Much", however, being any - as "nudity" is indeed not as prevalent as some folks seem to insist it is) I can't help but think that a better plan of action would not be to tell people what Not To Do, but to instead do what my family has done for many years now - represent who and what we are, in the way we personally choose to do it.  We exclude nobody.

If one is not prepared to join in, march, and represent what it is that they claim they want others to see.....well.... what business do they have telling someone else to not march, or to march on *their* terms? 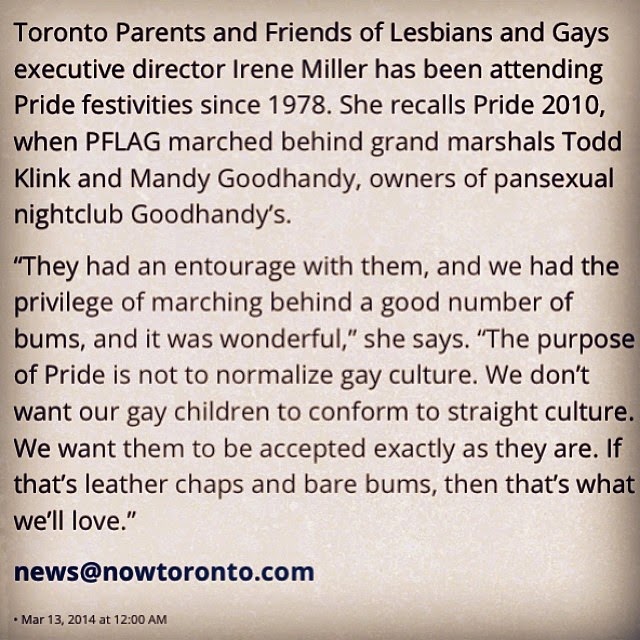 Michael Sam has just made history as the first openly gay man drafted to the NFL.
So, Michael Sam stands next to the man he loves.  He gets news that is not just the culmination of his own life-long dream, but is indeed truly groundbreaking - he's just made NFL and American history.  He does what anyone in that situation would do if they're with the person they love - they kiss and embrace and celebrate.

Cue the bigots - freaking out that he did what any straight person would be allowed to do, with no questions asked and no comments made: kiss the person they love.

The internet and conservative media (FOX NEWS in particular)  have been on fire for nearly 48 hours now, furiously spewing bigotry and hatred and disgust at...... a simple loving and touching kiss between two men who love each other, as they celebrated an historic moment, a truly momentous one, and a personal dream come to reality.

So, taking all that into consideration - how off-the-hook insane all the negative hateful responses have been......let's remember that this summer when Pride comes around, and some folks decide that "pride makes us look bad."

To whom? To the type of people who just freaked out because two men in love kissed each other, like any hetero couple would have done?

Catering to a bigoted bully's wants does not gain you their respect - it makes you a weakling in front of them.  It shows them that you're scared of them.

Every year we hear it from the same insecure gay men "Pride makes us look bad" - well, it seems that even two men kissing can "make us look bad" to ignorant bigoted idiots.

There are no reasons for being prejudiced and bigoted.  Only excuses.  Excuses are what one gives when they can't be logical, factual, rational and intelligent about their opinions.

So the next time someone says "Pride makes us look bad" - remember that to a bigoted idiot, even a *KISS* is enough to make them lose their shit with hateful anger.
Posted by Little Kiwi at 11:45

It's not about nudity. It's about PR. And for many years, the self destructive crowd have acted like freaks at Pride, which makes us all look bad. Of course we exclude nobody. But that doesn't mean we can't point out their emotional issues.

And let me point out your emotional issues: you still live in fear of what straight bigots think. those who don't don't have your worries and concerns and upsets.

If my parents, who march every year, are marching alongside those whom you feel "make us look bad", then aren't my parents, and folks like them, showing that "we're not actually bad, even if some of us are "dressed like freaks""?

As the people you're denigrating are indeed in the 'minority' in the parade, how can that distinct "minority" make us all look bad?

And further - why are the people lining the parade route watching having such a good time? They're not walking away from the parade saying "well, not that i've seen some guys being weird, I no longer support the gay community!"

How is it about "PR", btw? Pride is not about winning over bigots, nor even thinking about them - it's taking a day to not care what a bigoted hater may think or say - you celebrate you, in the way you want to celebrate it, without worrying so much about some socially conservative and prejudiced bigot.

I love this quote from your mom Irene, whom I interviewed recently for an article on World Pride that I'm writing. The comments about nudity, and subsequent board motion, by a TDSB trustee were very upsetting to many of us who work for the TDSB. Pride planning was in full swing. At the same time, LGBTQ and allied Torontonians were reeling from several events that piled up, one on top of the other:

*Canadian Olympic athletes were on their way to Sochi for the Winter Games in a country that had just passed three packages of legislation targeting queers.

*Rob Ford's statement that he would be staying from Pride again, and that it really had nothing to do with the cottage.

*The imminent passage of anti-LGBT laws in Uganda.

*Then, of course, Mayor Ford's demand that the pride flag be removed from the ceremonial staff at Nathan Phillips Square.

*Then came these preposterous remarks about "Canada's nudity laws."

Your mom's remarks were a breath of fresh air.