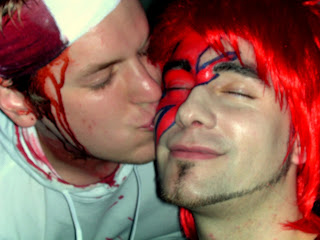 Ok. So Mok and I are HAMMERED! Like, if we were a shitty song from the early 90's, we'd be "HAMMER TIME!".....wait....was that actually the name of a song or just something he yelled? I can't remember, but I'm sure you know what I'm talking about.
Are you picturing him in his funky Aladdin-pants yet? :-)
Heheheheh
HAMMERTIME!
Totally Rad.
So, Mok went as Disgusting Headwound Victim. I went as Aladdin Sane - era David Bowie. Everyone thought I was Ziggy Stardust, so I just started saying I was Ziggy Stardust, because you know what? It's fucking close enough. If you can give me ANY Bowie reference I will accept it. One guy was like "Are you the Flash"? No. And clearly you don't know who The Flash even is, or who Bowie is, so you don't deserve to live.
So I killed him and Mok and I dumped the body in the Hudson river.
Then we went to a party! It was in the East Village. It was fun. We got DRRRRRRRRRRUNK on other people's booze. It went something like this:
*the boys arrive at the apartment where the party is* 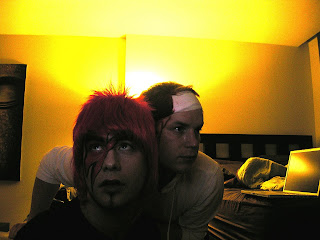 AladdinSane: Oh fuck....is this a BBBQ, with the extra B meaning BYOBB and that extra B being a typo?
HeadWoundVictim: Oh....yeah....ok, let's just drink their alcohol and see what happens.
AladdinSane: YAY!
So we did, and it was drunktastic. Funny...Halloween in NYC and I don't have any pics of like...the craziness on the streets, the random costumes, the utter insanity.
Oh well, I have pics of me and Mok and we look FAB!
Remember how "Mean Girls" totally called girls on their slutty shit costume idea of simply dressing like a ho while wearing ears that denote some kind of mammal? There's a gay version! There are, in fact, several. And they all suck.
1. "Fallen Angel". ... a guy in a thong or speedo, with angel wings (usually black), body glitter and stupid face makeup. and that's all. FUCK him. he's stupid.
2. "sexy athlete". this is simply a dude in athletic clothing that's been kept to a bare minimum (no pun intended)
Wow. You put on short shorts and worked out all day and now you're a "slutty football player" or something? That suuuuuuucks.
3. "sexy _____". Basically a guy in underwear or a bathingsuit, who then uses body paint to draw on whatever the fuck he's supposed to 'be'. it's lame.
There were lots of HeathLedger Jokers this year. Some good, some lame. Ditto with all the Palins, and all those college boys who dress as "The Crow". Wow. You're The Crow. Work it out. By the way, the mid-nineties called and want their ideas back.
OH! And what's with all the gay leather men that simply wear their leather gear? That's not realllllly a costume. I mean, it would be if I was doing it. But you ALWAYS do the leather thing, so it's not really ...well,.... a costume. For Halloween you should dress as some other gay thing...um...like ....a gallery owner. Or wear a business suit. Or dress like a twink. You have to have some sense of irony about it all.
It was a rad night out, and I had a lot of fun. :-) 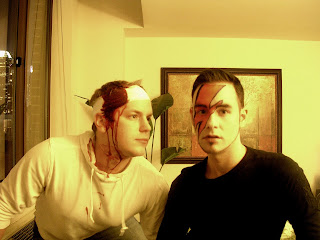