If you've delved into the world of online gay dating or Gay Apps, you've seen these words.  What you likely have not seen is any form of consistency in regard to what they mean. 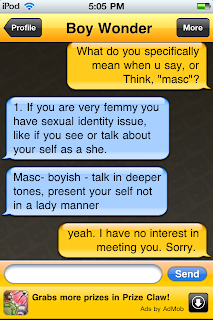 My point in all of this is that the words don't actually mean anything; at least not anything specific enough for it to be generally-accepted.  "Masc" is an amorphous concept. It means something different to everyone. Culture to culture, person to person.

Here are two more examples..............
This first guy insists that if people can tell that you're gay then you're not masculine.  Which I find odd. I'd argue, rather, that if you're a gay man who doesn't want people to be able to tell that you're gay, you're not masculine at all.  See what I mean?  He thinks masculine means "you can pass for straight, to the eyes of straight people who don't know too much about gay people."  I'd liken that to cowardice, and I'm not one who believes that cowardice is a terribly masculine quality.
Now, that doesn't mean it's a FEMININE (fem) one, either.  I wouldn't say that the opposite of masculinity is femininity.  Masculinity, to me, would be Being A Man.  The opposite would not be a woman, but a boy.  What do boys do? They lie, the evade, they give excuses. Men? Well, I've always thought that men stand up to be counted. 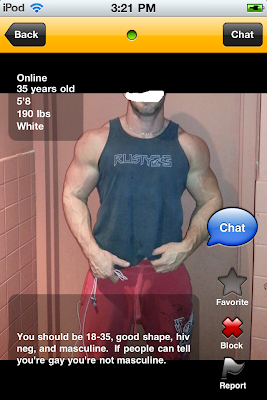 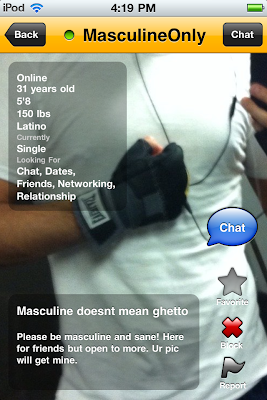 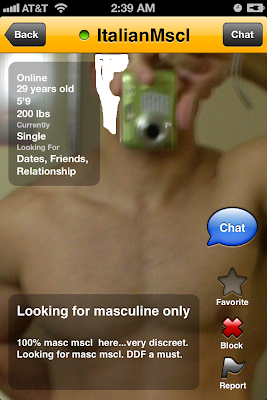 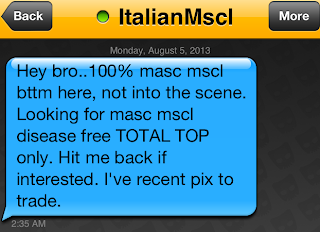 Say "masc" again. I dare you. While you're at it, tell me how much your Mom thinks you're cool. 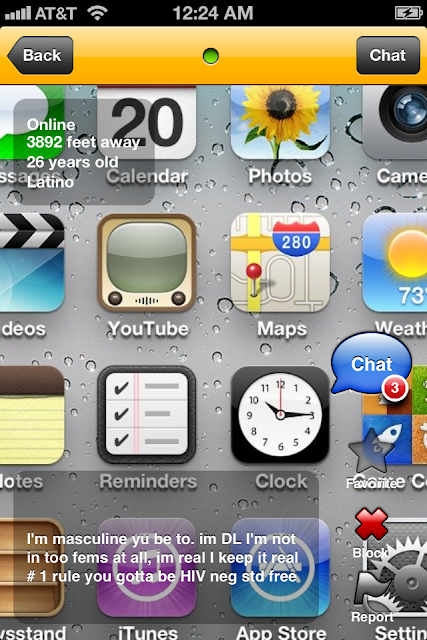 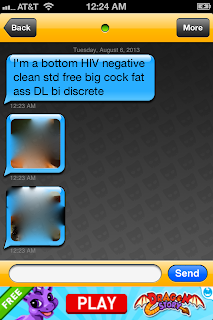 If one were to base their definition of the word "masculine" based on the profiles of those who use it on gay Apps, one might very well come to the conclusion that "masculine" means "I'm scared to show my face on this thing."  Or something.  I've always thought it sad that "masc" and "discreet" get paired up so often in these profiles. Or "discrete", which everyone should know by now isn't the word these "Not Out" guys mean to be using.
Again, I'm puzzled.  You're masculine, on the DL (meaning DownLow, meaning Not Out, meaning you lie, lie, lie, lie lie.  But he's not only real, he's keeping it real.  Just keeping it really real by lying. Because nothing says "I'm real" like living a lie.
See what I'm getting at?
If you're so masculine, why are you lying?
I'll tell you why - because you think you can't be a masculine man and a gay one, too.  And the reality is that *you* probably can't. But many others can.  You'll know them by their being Openly Gay, and (frankly) by their refusal to spend any time worrying about whether or not people think that they're "masc"

A very good friend gave a quote that I think should make sense to people who have the capacity to think soberly about this issue:
*ahem*
"*Masc* is like *cool* - to be it, one must first stop hoping that people think that you *are* it"
or as another buddy said:
"If you were actually masculine you probably wouldn't have had to tell me. By telling me you're really just telling me that you want people to think that you're masculine.  And that's not very masc, bro" 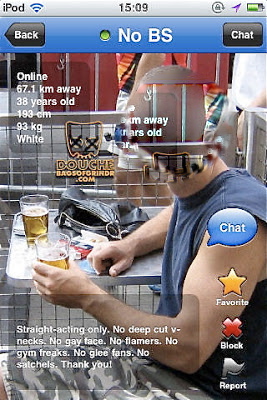 No BS? Sorry, Blanche. But that's all BS.

We live in an anti-gay culture.  We do.  It's 2013, and it's embarrassing that we're still mired by this nonsense.  Many gay people succumb to the pressures of an anti-gay culture by become anti-gay themselves, in an effort to save their own asses to the people they're afraid of. You've seen them, mostly online.  You know the types.  The ones who put up a distance between themselves and others in the diverse gay communities and then wonder why their lives as gay men are so unsatisfying.

They cling to an idea of "gay stereotypes" that is simply not even real: it's an Ignorant Straight Bigot's Idea of Gay Stereotypes. I saw a posting on facebook recently where some guy, in response to another of my blog posts, went on a patently-stupid ramble about how proud he was to "not care about glitten, drag queens, or have a lisp"
Glitter. Drag Queens. Lisps? Really?  Who taught you about Gay Stereotypes, Jerry Fucking Falwell?

now check this sadness out 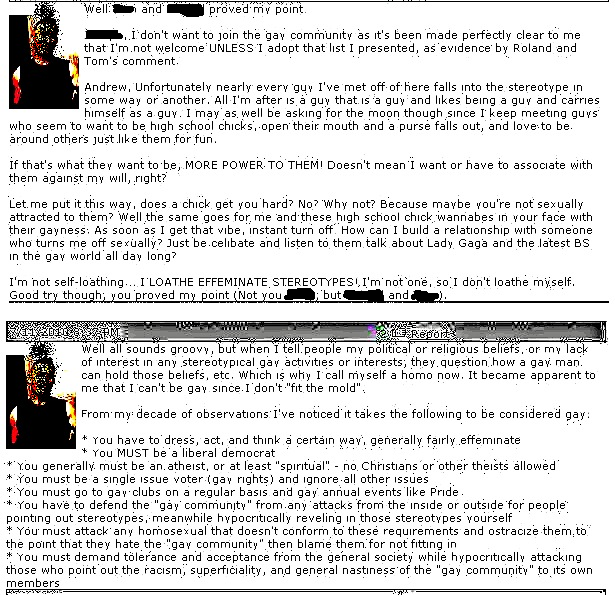 This last bit of bat-shit crazy is a perfect example of Insecure Homosexual Straw-man Arguments.  You know how it is, the insecure self-hating homosexual male refuses to check his own learned prejudices and insecurities and instead insists on projecting: it's everyone else's fault for being so gosh-darn liberated, dang it.  The guy who posted this insane rant, for what it's worth, went on to blog for a very short time about his new experiment in hypnotherapy - using hypnosis to make him attracted to females, because he was sick of being associated with "effeminate gays."

That's wonderful and useful.  Hypnosis to make you attracted to women, and no longer gay.  Rather than, let's say, using hypnosis to combat the internalized homophobia you still hold on to. Right? Oh well.  Not my life, thank freakin' God.  But what is he really saying in all of that?  Here's what: that the non-gay men in his life hate "stereotypical gays" - and for him to win their tolerance, he needs to not only not be "one of those stereotypical gays" - he needs to actively hate on them.  Wow.  What a strong empowered man.  I don't know any truly-masculine gay males who take any issue whatsoever with concepts of perceived-effeminacy, or "gay stereotypes".  None.  None whatsoever.  The only gay men who worry about such things are those who are still living each day worrying about what Others Are Thinking.

I recently overheard two young-ish straight guys talking in a coffeeshop, about what I assume is a newly-Out male friend.  They were commenting on how much their friend has changed.  That now that he's gay, he's suddenly "acting all gay" and "always doing gay things" and "isn't the same now that he's hanging out with other gay people".

No shit.  He's no longer having to pretend to be someone and something that he's not anymore.  Let him figure out who he is, after years of pretending to be someone else, and let him come into his own.  He no longer has to avoid doing, liking, or saying things that "might make him seem gay" - so yeah.  Fuck off.

Or this lovely dude who messaged me on both Grindr and Scruff... 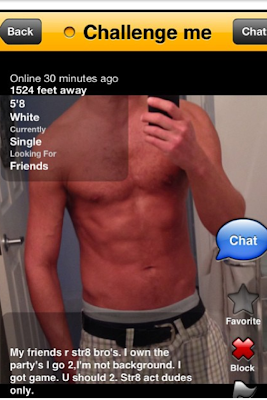 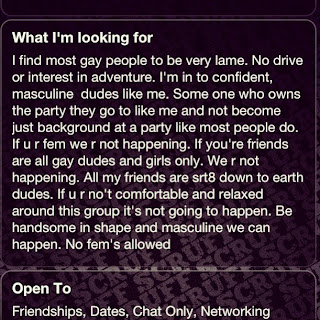 It's worth noting that Mr. Confident I Own The Party I Ain't Just Background did not have a photo of his face.  At all. Again, this is not just "masculine good and fem bad" - but an even more clear representation of what I've been talking about; do you think there are straight people out there who say "Just because I'm straight doesn't mean I hang out with straight guys and guys all the time, ok? All my friends are gay.." ?

It seems he, like many others, still considers STRAIGHT to be the Ideal.  Now, hideous grammar rears its head in this post, to the extent that my eyes want to vomit, so maybe we're not dealing with the brightest of bulbs, but it's still a sad indicator of how anti-gay straight male culture can warp a gay male's sense of self and identity and worth.

And on the "now that he's hanging out with more gays he's starting to Talk Gay and be Really Gay" angle - I went on a school trip to Tennessee for a few weeks when I was 16.  Know what happened?  We all took on a Southern Drawl.  Literally.  It was hilarious.  See also: my family and friends balking at my NYC-vernacular during my visits home to Canada.
You hang out with a crew of people, in a new setting or scene and you tend to take on the popular phrases, speech patterns, sayings, and vocal energies of those you're around.  WERK! ;-)

The tricky thing with discussing this subject with other gay males is that the insecure gay males who do indeed still harbor a lot of internalized homophobia will almost always deny it.  Followed, usually, by a straw-man argument wherein they turn it around to say "Why do you hate masculinity? Why are you saying I'm a faker just because I'm masculine?"
1. I don't.
2. I didn't say that and neither did anybody else.

What we, the sober-eyed empowered gay males, are asking of you is to rethink not only what "masc" or "masculine" means, but the weight that you, and society, continue to give it.  It makes no sense for an amorphous concept to hold so much sway in people's minds.  As a great friend, lover and mentor once said to me: "We're men. We're all masculine.  Either we all are or none of us are."

A sexy scruffy bear-ry cubby buddy of mine recently, on the bear-centric app GROWLR was hit on by a guy, whose profile was rife with "be masc, no fems", etc.  My friend called it out. This was the dude's reply..... 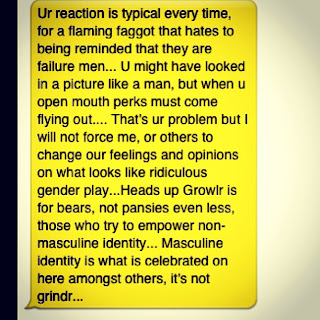 Yeah.  He sounds like a totally secure and confident gay man who is no way still trying to appeal to any and all anti-gay males in his own life.  Sure. Right.  Totally.

"MASC" is as useless a descriptor as "chill", "laid back", "down to earth", "no drama", and "sane".  SANE.  Sane cracks me up. Really? That's the word you're going to use to describe yourself or a prospective partner?  Do you think saying "sane" will weed out the crazies?  No.  Helpful Hint: "sane" is like "not into drama" - those who say it are those who create it.

People complain about their lack of luck in online dating and then go to show how inept they are about using apps or dating servives: here's what to do - BE SPECIFIC.  BE DISCERNING.

When you rattle off a list of those meaningless terms that everybody seems to use you're going to come up short, and disappointed.

It's as stupid as "a guy who likes to have a good time" - what the heck does that even mean? Again, like "masc", absolutely nothing.  Fun isn't something you do.  Fun is something you experience from doing something specific that you like.

* on a side note: considering that many online profiles and Apps don't leave much room for text, WHY would one bother writing "muscular" when, you know, you could simply post a picture that shows your musculature?