The Importance of Being Allies - How Supportive are Your Supporters? 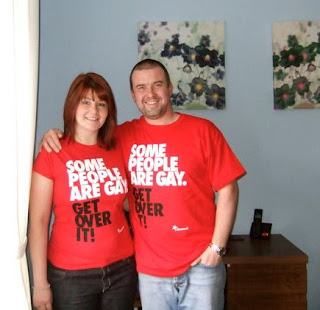 The above photo greeted me this morning when I signed onto Facebook. It's my sister and my brother-in-law; shirts they ordered from stonewall.org.uk. Wonderful, eh? And powerful.
All-too-often I hear members of the community saying that they don't need to "proclaim" their orientation or "wear or on their sleeve" or "be defined by it", which (to me) sounds more like cowardly gay-apologist nonsense that anything else. Look, the reality is this: anti-gay bigots sure love to scream from the rooftops how much they hate gay people. And as America refuses to pass hate-speech legislation, we cannot shut them up. What we can do is raise our voices to match theirs, and be just as vocal, just as visible, and combat their shouted lies with truth and love.
And so, these thoughts came to mind....
Posted by Little Kiwi at 13:52 1 comment:

What's Next For Andrew Shirvell?

Well....is he? Of course he is. Family can always spot Family. But the biggest indicator is simply this: the "I totally hate gay people!" thing is pretty much the go-to disguise for closeted homosexuals.
Mark Foley. Ted Haggard. Larry Craig. Bob Allen. Glenn Murphy Jr. Ken Mehlman. Charlie Crist (wait for it..it's gonna happen). George Rekers. Rick Scott (wait for it..it's gonna happen). Jim Kolbe. Richard Curtis. Bob Bauman. pathetic theatre-queen Justin Caster. J.Roy Ashburn. Edward L. Schrock. David Dreier. Jim West. G. Harold Carswell. Roy Cohn.
Andrew Shirvell takes his place among the sorry list of homosexuals who were not merely closeted, but virulently anti-gay until...well...until the Good Ship Karma paid them all a visit.
Poor thing(s).... *le sighhhhh*
Shirvell had boasted, previously, about how "everyone supported him" in what he was doing. The problem, however, with living in an insular world where everyone reflects bigotry back at each other is that one becomes out of touch with...well...everyone else.

Shirvell, of course, is a homosexual. I say "homosexual" and not "gay man" because you're born a homosexual - you have to EARN being gay, by Coming Out and embracing who you are. You have to claim it and you have to own it. It is not handed to you.
So, what now?
Shirvell has been fired from his job as assistant A.G. Good.
Chris Armstrong will flourish. Young, bright, Out, strong? He's gonna do just fine.
Shirvell? No way he's going to live this down and find solid employment, and who does he have to turn to? A bigoted family he's spent his life trying to convince that he's not gay by being a big ol' anti-gay bigot.

One day, he will be Outed. And after we (secretly, and some not-so-secretly) take pleasure in it (because, hey, karma is real...) we can encourage him to do the right thing: become an Advocate for equality, by sharing his story of how self-hate and religious bigotry turned him into a man hell-bent on attacking others to distract the people who were supposed to love him from the truth about Who (and what) he is....which is a closeted homosexual.
Here's hoping that one day Shirvell finds the strength to be a Gay Man.

I remain, more and more, awed and humbled by my transgendered friends. It's hard enough being gay in this patriarchal culture of hetero-normative lies and bullshit, where gender-nonconformists are often the target of very insecure, angry and unintelligent people, but to be transgender is something that the world needs to catch up on understanding. There are, of course, more than two genders. There are at least six. I have many trans friends, and am continually inspired by their remarkable resilience in life.

Admitting to being gay is so difficult for some people, especially males, that they have to condition their "acceptance" of self by reinforcing that they're "still a real dude, and not one of those stereotypical flamers or somthing..." Ugh. What bullshit, eh?
So, you're gay, but you're still a 'real man', eh? Good think you're only gay. You wouldn't have the strength of character it takes to be openly transgendered.

It is Living Out Loud, indeed. Defying gender-norms, externalizing your internal self, and having the courage to *change* your gender in the eyes of a confused world that all too often chooses to react with anger and hate at anything that confuses them.

My brothers and sisters, I fucking adore all that you are and I will always have your back.

Oh! And here's a pic of my awesome parents with Buck Angel, because they're all totally fucking awesome. 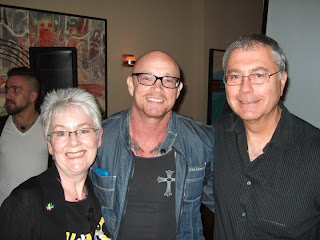 Two videoclips I wanted to share. Buck Angel (*swooooon*) who is the hottest freakin dude ever, and who happens to have been born into a female body. Angel ROCKS. Take everything you thought you knew about what it means to be a man or a woman, coat it lube, and FUCK it.
OH, and this piece of genius writing.....the performances of which cut my soul apart, and then stitched it back together with their strength. I'm in awe.