Phoebe Cates Made Me Gay

Oh, my childhood love for Phoebe Cates, which I've never outgrown. From the skin-baring tawdriness of "Paradise" (if you're gonna rip off a film, why rip off a film as lousy as "The Blue Lagoon"?), and "Private School", to the 80s classics that are Fast Times at Ridgemont High and Gremlins. The typical 80s-curios that are Lace and Lace II ("Incidentally, which one of you bitches is my mother?"), Date With An Angel, and then her all-too-fleeting but actually wonderful work in the 1990s. Drop Dead Fred? It's a cult film my generation has embraced. Princess Caraboo? One of the sweetest of the 90s-era of lavishly-mounted period romps. And then "The Anniversary Party", where her ecstasy-fueled breakdown about motherhood stops the show.
I LOVE HER. And I always have. And I always will.
Posted by Little Kiwi at 17:48 No comments: 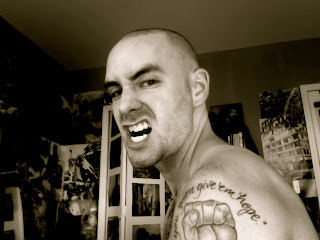 Yeah. That's right. I'm channelling my inner Ellen Ripley. I kinda love it, actually. Sure beats having to, you know, do my hair. Look at me, I'm a daddy now!
Posted by Little Kiwi at 18:14 1 comment:

A Tree of Life Grows in Brooklyn?

First, thanks to my good friend Sally for that title! ;-)
Second, I actually loved the film. Cannot wait to see it again a few more times. It stands as a singular experience, the most Malick-y film ever made. This is Malick's skill as a director - his choice to share an experience and tell a story without the expected trappings of conventional narrative, structure, exposition and linear storytelling. In a way, it's sort of like a mega-budget feature-length "thesis project" of a film. Those experimental short films where the filmmaker "tells a story" in a non-traditional way. Well, he's the long-ass version. I hear similar criticisms from people about films like this, or films by David Lynch - "it didn't make any sense, I didn't know what it was trying to say."
Uh...ok. I can list a couple hundred films that "made sense" and that were clear in "what they were trying to say" that still totally and utterly sucked donkey balls and were failures. It's abstract art, folks!
It's an emotional story, told through the memories of a child and a grander sense of life on Earth that keeps reminding the viewer that all this complexity and the questions of life were and are the ongoing evolutionary process of single-cell organisms.
The use of music in the film is as flawless as always. The photography absolutely stunning in its clarity and composition. The performances so real and unforced that it just feels as if an invisible camera just happened to catch the action.
The heartbreaking simplicity of small insightful moments; a gesture of love when one young boy puts his hand on the shoulder of another, who lost his home and received burn scars from a house fire. The guilt and intense shame of adolescent hormones rushing through a young man's mind. The need to destroy and exert power over others coupled with a clashing message of love and understanding and empathy.
There are moments in this film that will haunt me forever. For those who just didn't like it...well...I made this video for you.
Posted by Little Kiwi at 12:19 No comments: