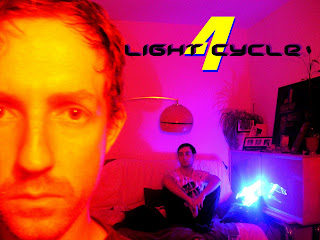 My band. We're rad. Album being released independantly. 80's synth new wave pop rock trip hop awesomeness.
What do we sound like? We sound the way that neon looks.
We sound like lights shining off the wet pavement in an early Ridley Scott film.
If Berlin and David Bowie had sex with Tangerine Dream and New Order, the love child would be LIGHT CYCLE 4.
Rad.
:-)
Posted by Little Kiwi at 13:41 No comments:

But This is Just Plain Weird...

Ok. I literally just found this on youtube. It has less than 150 views. It's stupid. But you have to just wonder about it all......
-Who wrote and recorded this song?
-Where did you, the videomaker, first hear this song?
-What made you think it needed a Walt Disney Pictures' Hunchback of Notre Dame music video?
-How long did it take to decide which clips to use, and where?
-How long did it take to get the editing just right?
-Seriously, WHAT inspired this?
-You were cracking up the entire time you made this, eh?
-Can I have some of what you're smoking?
-Please?
-For real. You made this video. Are you happy? I'm kinda happy you made it. It's just weirdly wonderful, in the most inanely tacky way.
Yeah. For real.

The Condescension Festival of Late-Nite Television

Ahhh....late-nite TV. So tacky they refer to it with improper spelling. *sighhhh*
Nite. Cuz dats how it looks like it should be spelled. The programming? Who cares? Tit movies. Car movies. Exploding Car & Tit movies. Starring Richard Greico (*yum*).
Or Shannon Tweed. Who I think fucking rocks. For real. She's totally rad.

But anyway, late-nite tv is condescending. Once it's past 1am, the networks don't care. The advertisers don't care. You see shitty shows and shittier commercials. This is the domain of the non-union (ie, not SAG or ACTRA) performer. Horrid *actors* that were hired at a casting at a club in downtown Detroit one night inform you of the fun of "Party Lines*, trying in vain to hide their brrrrrrrrrrutal local accents.
Commercials for smoking-addiction cures. Commercial after commercial asking if I've been in an auto accident, have outstanding traffic fees, or need a good,cheap criminal lawyer or perhaps a community college. Wow. The TV thinks so highly of me.
The shows are dumber, and the commercials are literally selling their products phonetically - each one talking at me like I'm softly retarded or something.
Advertisers pay for when their commercials air. They're looking to reach their target demographic. Apparently, people who watch COPS at 2:30AM have outstanding warrants, need to go to college, need a lawyer, are bad drivers, and smoke too much.
Who are we kidding, they're probably right, but it's still a marked difference from primetime programming.
I love the little differences.
Posted by Little Kiwi at 00:56 No comments:

Ok. Longcat. There are TONNES of "longcat" videos, fan pics and other assorted bits of weirdness on the internet. What is long cat? I don't really know where it originated from, but it's a very very long cat. There must be some pop-cultural reference I'm simply too unhip to understand, but I'm obsessed with the utter insanity that is this music video.
I don't really know what's going on, but I like it! 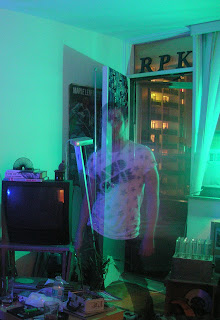 Here it is folks! Little Kiwi is here to save you all by translating the ridiculous codes that are online profiles! You may think it's a simple case of reading a profile and taking it literally. You're wrong. I'm here to help! I've left the world of online behind. It's too crazy, but for all of you still giving it a shot, I'll do my best to impart what I've learned.
Let the translations begin!
Ok, we have the different groups of males online, most easily defined by their screen-names. There are the guys that describe themselves in purely physical terms. These people are usually about as stupid as a drunken child. They have no imagination, they usually are borderline illiterate, and they buy into the generic middle-American idea of "hot". Their names are usually various combinations of the following words:
Masc Jock Frat Stud Muscle Varsity Abercrombie Hollister Dude Bro Fitch 69. Yeah, they usually throw a number in there too. Usually it's 69. Subtle, eh? How deep.
Now, there aren't too many different combinations for those coveted keywords, so you see some pretty wack-ass names. "BroDudeMuscleFrat69". "HollisterJockMasc4Masc".
I'd love to serve them all molotov cocktails. But anyway....if you see people with these names, they're worth nothing more than a fuck. But I suggest this instead, DON'T fuck them. You can be a slut, just be an ethical one. Don't reward such mediocrity.
I have learned that the only thing more completely satisfying than going home with a totally "Conventionally Hot" guy is seeing the look on his face when you tell him you're not interested. It's fucking PRICELESS! Possibly more fun than sex. I'm not even kidding.
:-)
Then there are the hidden clues in profiles. I have learned that guys that put in their profile that they're "not into drama" are always, always, the ones that create drama. They're usually borderline insane. Like that italian freak I blogged about a few days ago. They invent the drama. They are drama.
"Not into Drama" - Translation: "I don't ever want to be disagreed with about anything ever. I have no brains, and no ability to rationalize intellectually, and I cannot be challenged on even the slightest or seemingly trivial circumstances."
"VGL" - 'Very Good Looking' - Translation: I'm the most stuck-up, conceited, socially unaware human being on the planet. My ultimate goal, every day, is to be the hottest guy walking down the street. I consider what I look like to be "hot" and any variations or deviations are considered, by me, to be lesser. Word of warning: if I get turned down by a guy I get really really really angry about it, because I believe that everyone should be into me. Because I'm really really into myself.
"Str8-acting/Str8-looking" - Translation: "I'm ashamed and embarassed to be gay. I hate myself, I have gay shame, and I'd rather side with the enemy (homophobic straight bigots) than with my own community. I wish I was straight, and I feel threatened by gay people who are openly, proudly gay, because even though they're more flamboyant, they have bigger balls than I'll ever have. In fact I have no balls at all."
That's what the usage of the term "str8acting" means. Nothing more. Nothing less.
Take it from LittleKiwi, you all have permission to shove your fist down the throat of anyone you hear using the term "str8acting". It's so homophobic and self-hating. Seriously. Fist down throat.

See how much easier it would have been if they'd just listed the specifics? *sigh* It's all in the details, folks.

Now, if you see a person that says they're only into their own ethnicity, this person is a racist. I'm not joking. That's not "personal preference", that's not "taste in men", that's unaddressed internal racism. End of story. Don't fucking argue with me on this. I'm right.
All those guys who write "not into fats, fems, asians or blacks" need to be wiped off the face of earth. That is some sick prejudiced shit there, my friends. Don't reward that kind of intellectual mediocrity. Be an Ethical Slut. Don't fuck a racist. Don't fuck a self-hating homophobe.
There's also the flipside, people who are (for whatever reason...) ashamed of their own ethnicity. So much that they don't list what ethnicity they are, or they use colour-doctoring and odd angles in their photos to make it seem that they're not the ethnicity that they truly are. This is baffling to me. Are these people trying to trick racists into sleeping with them? Do they plan on meeting people and posing at only certain angles while they surround themselves in ridiculous Photoshop lights so that they have an angelic halo of non-ethnicity around them? It's just weird. Don't be ashamed of what you are, and if someone isn't into because of your ethnicity, then that person is a worthless racist and not worth your time anyway. Done and Done.
PHOTOS:
Photos on a profile should be of you. You recently. Ever have someone send you a photo and say "it's not a very good photo" as they're sending it? Why? Why are you sending a photo if it isn't very good? Aren't we gay? Don't we ensure that the only photos that make it onto our harddrives are ones we'd be proud to show off? Why upload and send a pic if it's a piece of shit? Or better yet, a guy with a photo of himself...in the distance..weaing a baseball cap...and sunglasses...with his head tilted up at that weird angle that gives him a thick neck (which is his intention) but makes him look like an all-chin/all-neck stroke victim (which is NOT his intention). Irritating.
Abercrombie? Hollister? Puka shell necklaces? Backwards caps? Maybe if you're a gay and closeted teen on Myspace. But that's it. Out of highschool? Leave that shit BEHIND!
Then there's the people who post picture of themselves....from like 8 years ago. Great. Nice. It's totally worth it to know that the out of shape Mr. Burns lookalike was once a fit young lad, wayyyy back when he was in his early twenties. Now please let me step into my time machine so I can bone the person in the photographs. Thank you. What's that? Time machines haven't been invented yet? Oh, right! Now fuck off and get some recent photos. No sense in lying to people.

Well, that's all for now, tune in next time when I mercilessly tear apart some other group of people for your benefit.
:-)
Love, Little Kiwi