WHOOOOO-boy. Well, someone appears to be a big old idiot. This is, of course, utter bollocks. This man is, of course, not in any way a voice for the Jewish community. He's a far-right ultra-Orthodox Jewish Rabbi in NYC who might as well be their version of Fred Phelps. He's not taken seriously by Jews, nor by any other human beings with functioning brains.

Still, his anti-gay prejudice is so intense that he literally is now saying that God didn't mind that the Holocaust happened, or that slavery happened, or racial segregation, or any of the wars around the world. God doesn't mind any of those things, apparently God only cares that gay couples are marrying.

Because that makes sense. This guy is hilarious - it's as if Harvey Fierstein and Woody Allen collaborated to bring a ridiculous character to life. Like an ultra-Orthodox Jewish version of Kane from "Poltergeist II: The Other Side."

And note the sibilant S sounds he hisses out. Yeah, Mary. Exactly. He's one of "those".
Typical.

Oh, look. Another gay racist. *barfs all over his own cock*

I don't even know where to begin with how ugly this is. Now, I'm going to ignore the put-to-rest body fascist that lived inside me once upon a time, because as I've lived and learned I've grown to appreciate and see beauty in all shapes and sizes. It's not what you have, it's how you are about it, how you carry yourself.

But LORD is it hard, as bitch makes it way too easy with his food analogies. With all those dietary restrictions one can only wonder what he IS eating and exactly how much? Does this look like a man who has ever turned down food? What *does* he like? White bread sandwiches with lots of ham and mayo?

Ok, enough. I don't like body-facism, but I also don't like racism and this dude just made it too easy. 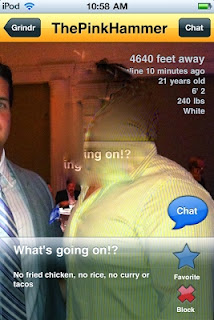 Going through old storage boxes in my parent's basement, I found some old toys from my childhood that had yet to be given away to needy children.
Aside from the still-working E.T. Furbie making me shit my pants when it started talking me in the darkness of the basement, it was an oddly fun and emotional experience to once again hold these toys, then pack them up to be given to charities.

We all, as children, anthropomorphize our toys. We project an assumption that they care about us as much as we care about them. I guess another factor for me, and I assume many, is that these inanimate objects were often our substitute for real friends. I was the local fag by age 7. I lost myself in fantasy at home with my toys. I was frankly a little bit stunned at the sizable lump in my throat as I saw these toys again and held them for one last time. Total TOY STORY 3 moments. I actually hurt - like I was saying goodbye to a friend and savior. In a way, I suppose I was.