Why Is Jason Herasemluk So Consumed With anti-LGBT Hatred?

Jason Herasemluk, is a man from Alberta who is seemingly very very upset about the much-needed revisions to the sex-education curriculum in Ontario.  So upset about the revisions that he's taken to Facebook to show everyone ....well.... that he's the reason these revisions are so needed.  It's no surprise that a man who harbours these utterly bigoted opinions was a member of the Alberta Alliance party of yesteryear, but how crushing to hear that he's involved in groups seeking to *HELP FAMILIES*  - I guess helping families with LGBT children or family members doesn't count, eh?

As I've written about before, it's blatantly obvious that the objections to the curriculum are based on either lies and misinformation, or flat-out anti-LGBT animus.

What's appalling is that a man with an interest in politics would take to Facebook and explode with this bigotry that is not only deeply disturbing, but utterly juvenile.

Canada - is THIS what we can expect from members of the "Progressive Conservatives", in 2015??
A man who denies the reality of LGBT youth suicides, utterly denies that young LGBT kids are killing themselves, and then goes on to show that he's the reason they do kill themselves at a disproportionate rate.  Appalling. 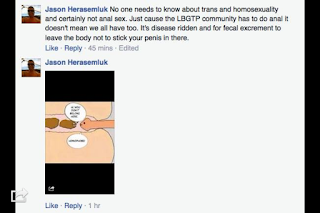 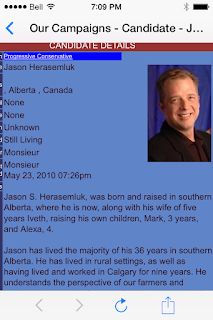 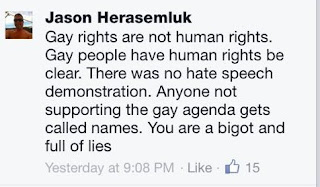 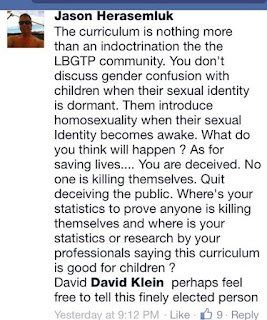 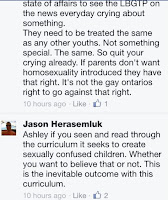 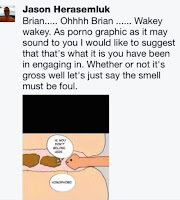 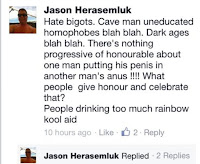 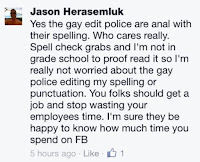