I first came across this when I was 10 years old, in Toronto, and learning about the Underground Railroad. It moved me then, and it moves me now. This is an important part of the ongoing battle for Equality, Civil Rights, and the freedom to live in a culture free of prejudice against minorities.

A biography of this remarkable woman is included in the book "Gay Icons" by Richard Dyer. 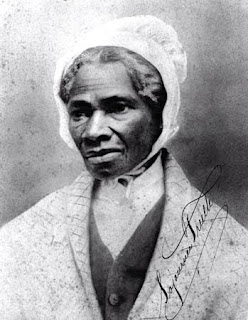 Delivered 1851 at the Women's Convention in Akron, Ohio

Well, children, where there is so much racket there must be something out of kilter. I think that 'twixt the negroes of the South and the women at the North, all talking about rights, the white men will be in a fix pretty soon. But what's all this here talking about?

Then they talk about this thing in the head; what's this they call it? [member of audience whispers, "intellect"] That's it, honey. What's that got to do with women's rights or negroes' rights? If my cup won't hold but a pint, and yours holds a quart, wouldn't you be mean not to let me have my little half measure full?

If the first woman God ever made was strong enough to turn the world upside down all alone, these women together ought to be able to turn it back , and get it right side up again! And now they is asking to do it, the men better let them.

Obliged to you for hearing me, and now old Sojourner ain't got nothing more to say. 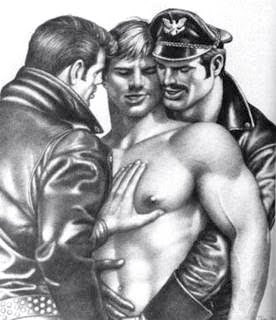 I always thought the guys who freaked out about "pride being an excuse for freaks to parade around" was the most cowardly, conformist nonsense. Yes, it IS a time for 'the freaks' to parade around, because if you really think about it, nothing these 'freaks' are doing is harming anyone, only the sensibilities of milquetoast ninnies who, I imagine, want straight people to think that our LGBT sex-lives are either nonexistent, or that we only have sex in the missionary position while dutifully fulfilling a respectable level of decorum: lights off, voices low and deep, going through the motions and not having 'too much' fun.
You know, that even though we're "queer", our sex lives are unimaginative and boring and no different from the boring sex lives of straight people who have so much time on their hands that they can't stop thinking about, and warning about, the sex lives of gay people.

I think there is a level of Sexual Revolution and Liberation tied to The Movement; I sort of reject the notion that Gay Liberation is simply about legal rights, and laws, and "helping gays appear normal.'
Fuck normal. I don't want to be seen as normal. I'd rather eat glass. NATURAL, but not NORMAL. Left-handed people are not 'the norm', they're not 'normal'. They are, however, naturally left-handed.

Fetish fairs, or the rad-wicked stuff I saw at Folsom yesterday offer people a view of what others like. what MANY others like. You don't have to be into any of that stuff, but it sure is interesting to see what others get into, and how they find freedom through sexual exploration. There can indeed be a profound emotional component and element of trust to S&M and domination roleplay.
Sexual Liberation: the freedom for an oppressed group to not only have legal Equality, but the mental equality to actually enjoy and explore their own person INDIVIDUAL sexualities (sexualities, not orientations...) with the freedom to allow themselves to indulge, explore, experiment and figure out just what their sexual appetites are, and how they are about them.

That people will have the freedom to explore and discover their own personal sexuality without fear of what others may think about it, or how they'll judge them. It just seems very clear that not only are LGBT people being denied Equal Rights, but a culture of anti-gay prejudice has also denied many gay people, especially males, the mental freedom to unapologetically and unashamedly explore their own sexual identitities - they're already 'gay', they don't want to be seen as anything "more weird". You know, "gay but normal." That's great if you are, uh, "normal", but I can't help but think that if you're comfortable in your normalcy you won't be offended by someone who's a wee bit more Out There.
like those people who say "those leather guys make us look bad"
uh...how?
what's bad about the leather scene? we're supposed to shy away because some unenlightened people don't understand something and choose to feel negatively toward it? I don't get that, and I think it's ridiculous for members of our community to join in with some "yeah, they're so weird, I'm not like THOSE people" mentality.
Why distance yourself? Why not challenge the idea that these scenes are 'negative'? You don't have to become a leatherdude yourself, lord knows I'm not into the extreme S&M scene, but I'm also not threatened by it, therefore I'm secure enough in myself to defend their right to do it, and to share it with others who may be curious or intrigued.
there is indeed a very strong emotional component to the cross-generational relationships that I and other friends of mine have been involved in. Father Figure? Perhaps, but in a different way from our own biological fathers, of course. The element of protection, nurturing, 'education' in its own way (use your imaginations...), comfort; it's a dynamic that is indeed reflected in gay adult erotica and pornographic films - sexual education so to speak. it's not that i think anyone is looking to actually fuck their biological father, and i'm not even talking about specific roleplay, but embracing the dynamic of an older gay mentor and a protege, be it sexual or platonic.
Some you can grow close to and genuinely look up to. Someone, often wiser, who can look out for you, keep you in check. Experience in life is something you want in a friend.
I'm still finding out who I am, sexually and otherwise. In a culture of oppression and bigotry and overwhelming cultural message demaning we all CONFORM! - I've struggled with the 'sexual' part of my sexuality; for years I was a gay man that was terrified of men. I thank GOD for the men I've known who've let me be open about this with them, and who've helped guide me, safely and securely, into discovering and finally ENJOYING my own sexual identity. That's sorta what a "Daddy" is, you know? The protector, the teacher, the man who helps you find yourself.
I mean, come ON, who DIDN'T fall madly in love with Baron Von Trapp in The Sound of Music.
I want to rest my head on his shoulder and have him tell me that everything is right in the world.
*swoon*
we all just want to lose ourselves in Christopher Plummer, admit it.
or Ed Harris, circa "the abyss"

re-focusing my Thesis Statement to Include the Reality That Gay Men are Living in a Patriarchal Heterosexual Society:

I've known gay men that have issues with performing oral sex, or bottoming - basically a fear of emasculation. They're ok having gay sex, as long as they're taking what they consider to be "the man's role" in the activities.

There are gay men whose sexuality as gay men, and as individuals, is crippled by how they've dealt with a patriarchal heterosexual society's 'ideas' about what Sex Is Supposed To Be, and What A Man Is Supposed To Be.
don't they say that all girls want to marry a man that reminds them of their father?
and that all boys want to marry a woman that reminds them of their mother?

i think with gay men, as many have pointed out, there are often unresolved feelings of neglect, anger, bitterness, about the tensions that arose in our lives. in the cases of some of us, because we're gay. in the cases of others, because the father may have had an addiction, abusive tendencies, or been an absentee parent.

this could affect how some of us deal with males, even on a platonic level and not merely sexual. Some gay men have terrific relationships with their fathers. Some gay men always had a father that was an ideal role model, and someone to aspire to be.

i think there's a beauty in having a relationship, platonic, romantic, sexual or some variation on those themes, with a man you can look up to. a man who can help you see things with a different perspective, as equally of value than gaining a perspective from a young guy, or another guy in your age bracket. Author Ethan Mordden writes about this, and about how it's reflected in gay erotica - perhaps the Brother-lovers and Father-lovers are not just about replicating life's permanent "relationships" but embracing the affection and the rivalry; the tender and the aggressive all at once.
All I know is where I am right now, and it's a place I never thought I'd be, or get to, a few years ago. I'm learning a lot about myself, sexually, and that in turn is teaching me incredible (and specifically non-sexual) shit about myself that I would not otherwise have been able to process.

That through different sexual dynamics, and the emotional liberation to allow myself to experience them for what they are, I've freed myself from my own self-imposed mental/emotional/sexual prison.

), I'm saying that the sexual self can be explored, and many people don't allow themselves to express their own individual sexuality, and not because it's 'dangerous' or 'harmful' (i'm not talking about the risky stuff), but because society at large has a perception that it's "weird", or "immoral" even though that last one often can't really be justified
As Macy sings "You've gotta express what is taboo in you and share your freak with the rest of us, 'cause it's a beautiful thing"
Posted by Little Kiwi at 09:26 No comments: