Saying Goodbye to a Hero

Jack Layton, leader of Canada's New Democratic Party (NDP), passed away a few weeks ago. He was a man I had admired for many years, and his death struck a chord with more Canadians than I think even he would have expected. For decades Canadian elections were a back and forth battle between the Progressive Conservatives and the Liberals - whichever party didn't win was always the Official Opposition Party. Well, not last time. The PCs won (boo! Hiss!) but for the first time in Canadian history, the NDP was the Official Opposition. The Liberal party suffered an historic defeat and the NDP an historic success. Canada's Green Party even won their first official seat, which thrilled me as I think Green party leader Elizabeth May is an absolute dynamo. An historic win - sending a message to not only the Liberal party to get their shit in order, but a message to NDP supporters and millions of other Canadians - we need to remember we're a country with multiple parties....we don't need to concede and vote for "the lesser of two evils."
I first met Jack Layton while I was out dancing at "Buddies" - my local go-to dance club - on a Saturday night out in Toronto when I was around 20/21 years old. Jack had come by to meet the young queer people of the city. Think about that - a candidate for Prime Minister going to one of the local gay nightspots to dance with the young gays, talk to them, listen to them, share with them, encourage them to vote and take an interest in politics.
Jack Layton always marched in the Pride Parades, too. Often his supporters had adorable signs which read "I'm a Layton Homosexual." Cute, eh?
(The last picture I've posted, though it's hard to read, is a snapshot of a chalk message which reads "Thank you for always marching in the Gay Pride Parades" - that's how important this man was to LGBT People - a leader that didnt' pay lip-service, this was a man who genuinely was proud to stand in solidarity with us, and call us Brother.)
This was a man, who with his wonderful wife Olivia Chow, absolutely championed the Equality of LGBT people. Ethnic minorities. The working class. The elderly. The poor. The needy. The "Us's", as Harvey Milk would say.
Was he perfect? No. Show me a politician that is and I'll show you a unicorn. But Jack was an incredible and compassionate man. Simply put, he made me proud to be a Canadian. He embodied what I love most about this country. He gave me Hope that a politician can be elected for the right reasons.
His absence is still felt. Weeks after his death, chalk messages and memorials and flowers and gifts still adorn the plaza of the Toronto City Hall. We won't see something like this in a long, long time.
It's been a number of weeks, and I still get a bit choked up about this. It was amazing for me, as a young guy still coming to terms with my comfort as a gay man, to find myself dancing and talking and sharing experiences with a legitimate party leader, and candidate for Prime Minister of Canada. It made me feel like I was worth something.
Thanks Jack. 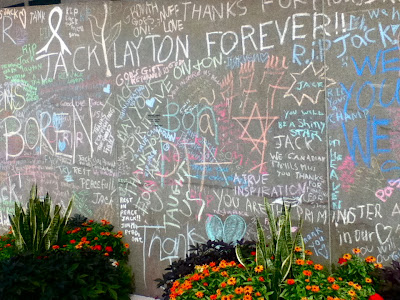 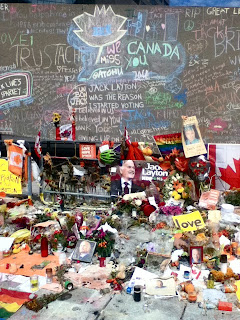 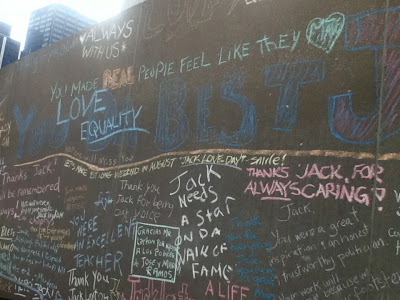 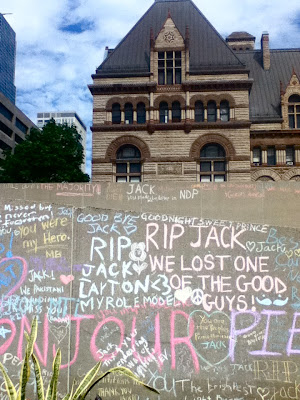 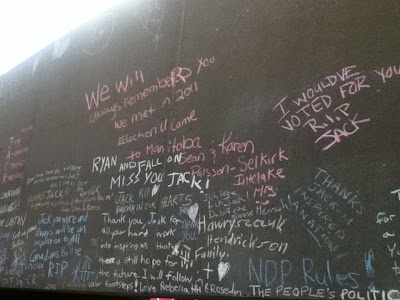 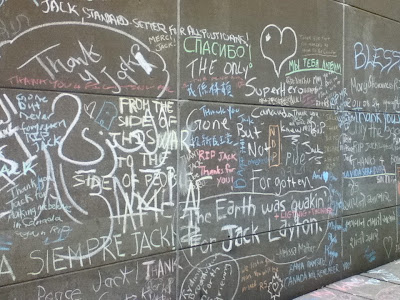 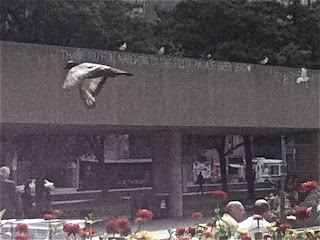 You know, it's one thing when this sort of nonsense is being spouted by the younger gay guys who are still struggling with finding themselves in a homophobic, misogynistic patriarchal world that worships all things White!, Straight!, Male! and (for lack of better word) 'Typical."

I can *understand* it in the younger people. But to be passing off this same bullshit as one is approaching 40? REALLY? That's just sad. He's not talking about specifics, either. It's utterly amorphous concepts. Truly, think about it - he's not saying he doesn't watch "Glee" (heck I don't watch it either, but I don't make a point on Grindr or gay-social sites of saying I DON'TWATCH GLEE!), he's saying that he isn't into guys who LOOK LIKE they watch "Glee". He has an idea of what a person who watches Glee looks like, and acts like, and he's scared of that. One more grown-ass man who's still living in fear of the things his asshole father considered "Gay Stereotypes" - baseless, ignorant stupidity.

So....Oh, boo-hoo hoo. I got called a faggot by a gay man who thinks he can pass for straight (in a tank top and army shorts on a patio? gurrrrl, that's like Official Homo Summer Wear!). Oh no. I'm crushed. The reality is this - this guy calling me a faggot will not make his own life better. In fact it will continue to make his own life worse. He only finds security in being gay by making sure he's not seen as "one of those faggots." Until you as a gay man can stand on your own two feet as a gay man, without downplaying, compartmentalizing, editing, censoring or "distancing" yourself from other gay men, you will never ever EVER find happiness, joy and authenticity in life.

Who was this guy? Quite likely the guy that joined in making fun of the "school faggot" as a child.  I'm sure a lot of us have met those guys later in life.  We remember them, they made fun of gays, laughed at fags, didn't get targeted themselves of course.  And then years later we see them at Woody's one night.  You join the throngs of haters in hating "them" in hopes the haters won't laser in on you.

The good news is that a lot of young gay people are learning this at a younger age. They're getting over these issues before they reach their midtwenties, or even actual adulthood. Alas, there are the throwbacks - the guys that never got over it. Good luck in life to any of you who think you will find happiness as a gay man, entering into gay relationships, when you're still being "proud" of your supposed ability to pass for something that you're not.

And here's the kicker - you're actually not fooling anyone. You may think that people can't 'tell' that you're gay, or don't know - you're wrong. They can tell. They know. And they also all know how insecure you are about it. That's why they never bring it up. Sure, they've askedgeneral questions, expecting you to mention a boyfriend, or some indicator that YES, you are in fact gay. And then they notice how you avoid it. No straight people are vague about their heterosexuality - only insecure homosexuals try to pull off that shit and pretend it isn't glaringly obvious.

S0 YES, they notice. Yes, they know. Yes, they can tell. And so they can also tell that you're a doormat - an insecure boy posing as a man. It's just terribly weak.
Nobody has bluntly asked "are you gay", because:
1. nobody asks that question because in a still-bigoted culture it's considered "rude" and "too personal" to ask such a question.
2. they can tell and they can tell how insecure you are about it and how you avoid it, so they therefore don't bother to bring up something that you clearly have such ridiculous baggage about.

Nearly 40 and still taking pride in (unsuccessfully) passing yourself for something you're not? I can't think of anything less *manly* - that's being an insecure little boy.

This is not about masculinity, nor even perceptions of it.  It's the sheer simple fact that no masculine, confident, secure gay man would say the things this man has said.  This is what self-hatred looks like. And that's not masculine. 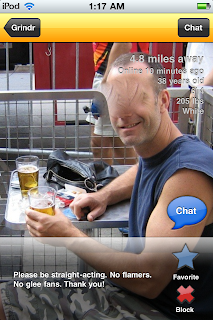 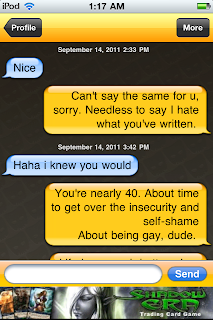 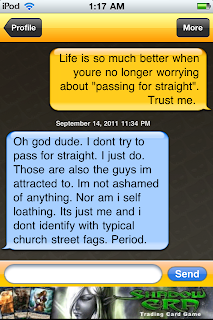 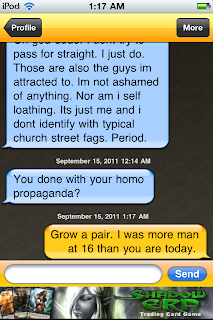 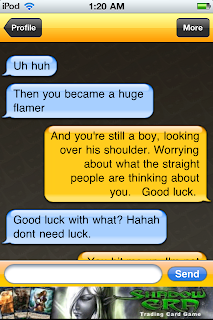 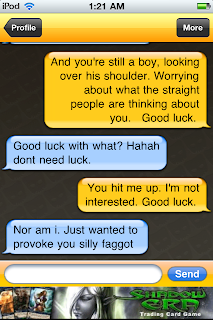 *edit. I was recently mailed this new pic of the same dunce. Love the new words. What a big man he is, eh? ;-) 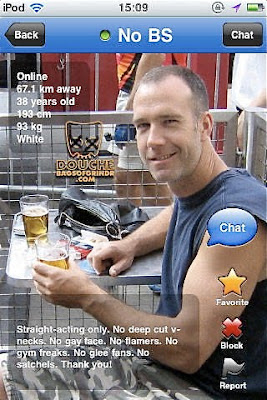 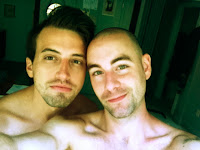 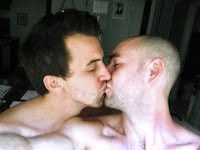 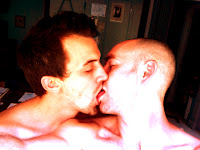 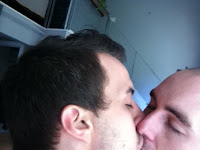